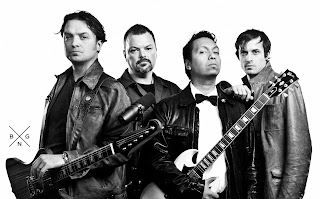 Ann Arbor, MI-March 10, 2016- Michigan’s hard rock band Black Note Graffiti will perform two shows right in the middle of 2016 SXSW at the RedGorilla Music Festival in Austin TX. The headlining shows will be on Thursday March 17th at 7pm at The Dizzy Rooster and March 18th at 7 pm at the Roof Top Bar in Austin, TX. They will be performing songs from their upcoming sophomore release Volume II, which promises more hard rockin’ energy from the band.

Since their inception, the band also has found success by charting on CMJ and landing media deals to air on ESPN, NASCAR, MTV, and DISCOVERY.

The multi-talented leader of the band Kris Keller will also be in the audience in Austin representing Noteborn Music Company and will be scouting for new bands at the festival to sign and license material to TV and Movies. There is a lot of excitement for the band right now and their ability to help other indie bands is a driving force behind what they stand for.

Black Note Graffiti is anxious to give their fans great live performances on one of the world’s biggest stages for indie music in the heart of Texas. The great music tradition of Austin will surely continue with this yearly event. The electricity and energy of introducing some of the new material that will be on the upcoming release is certain to be one of the highlights of their show and create more anticipation for the new release.

Keller and the band look forward to seeing some familiar faces, meeting some new ones and creating some more fans along the way. If Volume II picks up where Volume I left off it then it is a guaranteed rollercoaster ride of heavy metal and eclectic sounds.

Volume ll will be released this summer and updates and more information is available on their website.
www.Blacknotegraffiti.com