Richard Marx In Concert At The Colonial Theater 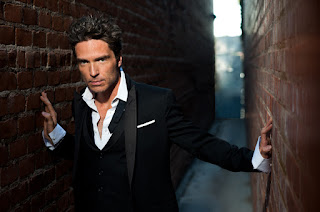 Richard Marx came to town Friday night at the Colonial Theater on a not so typical February night in the Berkshires. It has been the strangest winter that I can remember, one weekend its 14 below zero then the next it is pushing 60 degrees.

The atmosphere at the Colonial was one of anticipation before singer/songwriter Richard Marx hit the stage.

This artist holds a special meaning to me and my wife as his music was making its way to the top of the charts when we met. For me it was a bit of a history lesson as well. Marx has not only had a record number of hits on the charts in a short period of time, he has collaborated with several artists and wrote songs specifically for others that have charted. His debut recording yielded four Top Five singles and he has sold over 30 million albums worldwide.

This night was a man, his voice and guitar, and for a few songs he sat behind the piano. The talent this individual commands was enough and no backup was necessary. His voice is spot on, just as I remember it in the late eighties. He is a true showman, interacting with the audience, telling stories, throwing out quips to engage the audience with laughter, and inviting shout outs. Another thing that I found refreshing was how Marx discarded the house rules of no pictures and videos, encouraging folks to pull out their cell phones, which everyone did simultaneously lighting up the venue.

I was impressed with not only Richard Marx the vocalist but his ability to play the six string acoustic. If you are the only performing artist on stage you had better be able to fill in the space on your vocals and he did that admirably the entire evening. A plugged in acoustic has a great sound and I really appreciate what he had to offer.

He let the audience know that he wanted to give them what they came to hear, namely all the hits. Not only was that ground covered he cut loose with a few others lesser known tracks like the hysterical country number “How Can I Miss You (When You Won’t Go Away).” Marx told us of his love country music and his partnership with country star Keith Urban and the song he wrote for him then he went directly into the song “Long Hot Summer.” I recognized it instantly. He also played the song he wrote with Luther Vandross “Dance With My Father,” which was very touching particularly if you have lost a parent.

With “Angelia” he decided to go the unplugged route which was different. I recognized the huge difference in a venue between being amplified then suddenly not. I doubt people as far back in the balcony seats could hear him. Nevertheless it was an interesting change. Marx just emanates confidence and pleasure when he performs and that translates into the music directly to his audience.

Some of my favorites were the night kicking off with “Endless Summer Nights” and the way he closed out the night with “Right Here Waiting” behind the ivory keys. Check out the original video provided here with over 7.5 million views!

Richard Marx is a prolific artist with a long legacy of great music and collaborations. I don’t see him slowing down anytime soon and would highly recommend spending an evening with him if you get the chance.

I dedicate this night and review to my lifelong partner and best friend, my wife.