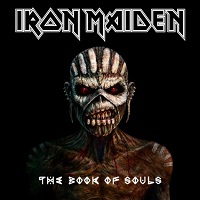 Iron Maiden is one of heavy metal’s most legendary bands, who rose to fame and dominated the charts during the 1980s. This is one of those cases where if you do not know who they are, you must have been living under a rock for the past few decades. Formed in London in 1975, the current incarnation of the band consists of Bruce Dickinson (lead vocals, piano), Dave Murray (guitar), Adrian Smith (guitar), Janick Gers (guitar), Steve Harris (bass, keyboards), and Nicko McBrain (drums).

“If Eternity Should Fail” is an all-around fantastic opener. First, there is the thrilling atmosphere in the beginning and, second, are the stellar vocals that bring everything to the next level. The music and vocals fit so well together that I would never want to separate them. There is also a great solo section a bit after the halfway point for good measure. Overall, it is a grand and mythic song musically, vocally, and lyrically. It is the perfect song to open the album, because if you like it, then I would be astonished if you did not like the rest. Living up to its name, “Speed of Light” is a hard-hitting rocker that comes out soaring like a comet through the night sky. There is great energy in the vocal performance, but the guitar work steals the show on this one.

“The Great Unknown” opens with a killer base line and astounds with its otherworldly sound. The vocals reach new heights that the previous songs did not, and the guitar solo around the five minute mark absolutely tears things it up. A towering beast of a song, “The Red and the Black” grabs you by the hair with its delicious opening riff, and then continues to groove right along. It is a fairly long, clocking in at just over thirteen and a half minutes, and though it does an adequate job of not wearing out its welcome, I was waiting for it to end by the eleven minute mark. Pulsating with energy, “When the River Runs Deep” is a fast paced, head-banging tune. “The Book of Souls” starts off mellow with an acoustic opening, before the whole band drops in to turn things up to eleven. The song has a great flow, leading to the most memorable riff on the album, making for a fantastic end to the first album.

Starting off the second album in glorious fashion, “Death or Glory” is a high tempo track packed with unrelenting energy. It is a ripping and roaring song that absolutely soars, and has a great eighties throwback vibe to its sound with its riffs and melodies, making for a rock solid metal tune. The jarring opening of “Shadows of the Valley” has a slightly sinister feel to it and it could be the theme song to a dark fantasy film. The music is nice and controlled metal during the instrumental.

“Tears of a Clown” is an interesting song, because it is a bit of a heavy metal lament. As you can tell by the title, the lyrics are sad and depressing. There is a nice guitar solo to lift the spirts up, as much as it can on a song like this. “The Man of Sorrows” is a haunting song with plenty of emotion. I am also thinking that it possibly makes “Tears of a Clown” a tad redundant. “Empire of the Clouds” is the closers of all closers, a truly epic and stunning song. There is the beautiful piano opening, an album highlight for sure, that moves seamlessly into metal territory with some nice harmonies and killer guitar parts.  It is by far the album’s longest song, but it never wears out its welcome.

It is safe to say that Iron Maiden has knocked it out of the park with The Book of Souls, and it made it over the fence with plenty of room to spare.  Despite a few minor glitches, I have found that this album has grown on me with each listen. This album is a must for Iron Maiden fans. The Book of Souls is a 21st century metal masterpiece.

Key Tracks: If Eternity Should Fail, The Great Unknown, Death or Glory, Empire of Clouds

Disc One
1.If Eternity Should Fail
2.Speed of Light
3.The Great Unknown
4.The Red and the Black
5.When the River Runs Deep
6.The Book of Souls

Disc 2
1.Death or Glory
2.Shadows of the Valley
3.Tears of a Clown
4.The Man of Sorrows
5.Empire of the Clouds