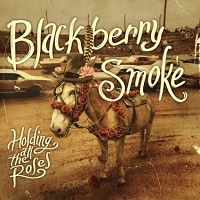 As the summer season officially comes to an end, Blackberry Smoke’s Holding All the Roses is the perfect companion to keep you company as the weather changes and the temperature starts to drop. Hailing from Atlanta, Georgia, Blackberry Smoke consists of Charlie Starr (lead vocals, guitar), Paul Jackson (guitar, vocals), Richard Turner (bass, vocals), Brandon Still (keyboards), and Brit Turner (drums). Holding All the Roses is their fourth album and their first release since 2012’s The Whippoorwill.

Holding All the Roses is a twelve track album that is nothing short of pure gold. From the opening rocker to the hauntingly beautiful ballad and to the catchy country tunes, Holding All the Roses offers up nothing but quality goods from start to finish. If you are new to southern rock or it has been awhile since you where into the genre, then this album is the perfect place to get into it.

“Let Me Help You (Find the Door)” starts with a kick and a jolt that electrifies not just the song, but also the rest of the album. The bar is set high here with a standout vocal performance and a short but oh so sweet guitar solo. There is a confident attitude that shines right through the music, making it hard not to fall in love with. It is just a perfect country rock song. “Holding All the Roses” keeps things moving right along with a lively opening that never lets up, making for one great foot-stomping tune with a blistering guitar solo. It has quite the catchy chorus, as well.

“Living in the Song” changes up the sound a bit by going the way of being an easygoing country song with a nice flair of rock. Next up is the laid-back “Rock and Roll Again” that is just a fun song with a great sing-along chorus. Overall, the song has great rhythm and harmonies that flow right along that make for a very pleasant song. The relaxed “Woman in the Moon” is breezy, end of the summer day type of song. It is the perfect song to listen to out on a porch or deck as the sun sets. Probably the most country sounding song on the album, “”Too High” dazzles with its simplicity and honest lyrics. Changing things up and bringing the rock and roll sound back into the equation is “Wish in One Hand,” which is full of more fantastic musical work and a sleek guitar solo. The mellow “Randolph County Farewell” is a short, acoustic guitar interlude.

“Payback’s a Bitch” has all the right moves. There is an edge and steely determination present in the music and vocals that is appropriate for the song’s theme of revenge. It a great song for those just out of a nasty relationship.  “Lay It All on Me” is a low-key and catchy country song. “No Way Back to Eden” is controlled and emotive tune. It is simple and beautiful. “Fire in the Hole” is a great way to cap off the album. It is the type of the song that can be put on repeat and not grow stale. The music is stirring and the vocals are as fantastic as ever here.

Key Tracks: Let Me Help You (Find the Door), Woman in the Moon, Fire in the Hole