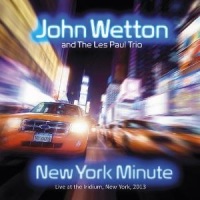 John Wetton is an English singer, songwriter and bass player who has been part of several iconic bands, including Family, King Crimson, Roxy Music, Uriah Heep and Wishbone Ash. He formed UK after leaving King Crimson and also fronted the supergroup, Asia. John has also managed a successful solo career, with many studio and live albums to his name. This album, New York Minute, is one of those live albums, dating back to 14th October 2013 at the Iridium Club in New York, and appears to have been recorded to highlight prostate and testicular cancer.

The musicians involved in the recording of this album are John Wetton (vocals, guitar), with The Les Paul Trio, comprising Lou Pallo (guitar), Nikki Parrott (bass) and Rodney Holmes (piano).

New York Minute is a 9 track album with a running time of around 37 minutes, which in todays’ cd market is a little on the short side. The longest track on offer is the finale, “Battle Lines” with a playing time of 5:52 minutes and the shortest is “Lady Madonna” running to 2:26 minutes. All of the tracks on the album are cover versions, including Steely Dan, Marvin Gaye, Beach Boys, Blind Faith, Bob Dylan, Don Henley, Beatles, Asia and John Wetton (solo).

I always approach live albums with slight concerns, although the sound quality has improved by leaps and bounds, I genuinely feel that live recordings are for the most part, bought by fans that attended that particular concert.

The first track up on New York Minute is “Do It Again” (4:03), the classic Steely Dan track and it starts with a little intro of John Wetton and some very sparse applause. Either there is a very small collection of people, or it is a very intimate setting, possibly a series of short sets by several artists? The music commences with some good piano and is soon joined by John on vocals. Although the piano is initially interesting, it is very repetitive before reaching a short piano solo section. The track almost shouts out for the vocals of Donald Fagen and this is at best a very average cover.

“What’s Going On” (4:13) by Marvin Gaye, is next up with more piano provided by Rodney Holmes, but there is nothing to tempt me to listen to the track again. There are some la-la’s and some woos from John between lyrics, a small jazz guitar riff and it is gone.

A Beach Boys cover is next, “God Only Knows” (3:39) with a short chat from John explaining that these are tracks that were important milestones in his career. The piano carries the track along, but yet again the vocals possess no depth and there are more vocalizations of doo’s and woo’s.

Track 4, the Blind Faith cover of “Can’t Find My Way Home” (3:20) is next and the piano and vocals work very well on this particular track. This track is head and shoulders above what has gone before.

Unfortunately, the kudos built up by track 4 evaporated very quickly with “All Along The Watchtower” (4:04) which slips back into the style of the opening tracks. There is a little more “grit” to the vocals on the title track “New York Minute” (4:59) but the track I feel just never gets going. “Lady Madonna” (2:26) being a piano driven track originally is relatively well done but again there are more vocalizations which do not add anything to the music, indeed do the opposite.

An Asia original, “Heat Of The Moment” (4:47) works well, being instantly recognizable, but the vocals fit like a glove, as John was the original vocalist. This is the second track on the album that does work very well.
The final track, “Battle Lines” (5:52) is a John Wetton solo track and having heard both acoustic and electric versions of this song on the Anthology album (to be reviewed soon) I was well aware of what I was in for. This is the third track that works and finishes the album off with a bit of a flourish.

Unfortunately, there are few highlights on this live collection and whilst the reason for the concert to highlight prostate and testicular cancer is to be applauded, the content does not match the sentiment. Lackluster cover versions from the majority of the 9 tracks mean that this album, I feel, is destined only to be of interest to aficionados of Johns’ work who want to have completed collections of his music.

The Ancient One recently reviewed another live album by John, together with District 97, and although not a terrific album, it eclipses this release. As always, give New York Minute a listen or two and decide for yourself, but for me, this is not an album I will revisit.

Tracks:
Do It Again
What’s Going On?
God Only Knows
Can’t Find My Way Home
All Along The Watchtower
New York Minute
Lady Madonna
Heart Of The moment
Battle Lines