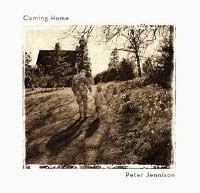 Peter Jennison began his musical journey on an old lime green piano that had lost many of its keys. As a child he would escape into the world of music and as an adult music has been his companion through ups, downs and in between. A lawyer, composer, soldier, father and husband, Jennison used his time while deployed to write some of the most poignant music I have ever heard. His first album in the Songs of War collection was Longing for Home and was written while he was deployed for a year in Iraq. His newest album and the conclusion to the collection is Coming Home and it focuses on returning home to families, wives and in some cases, in a flag draped coffin.

As I turned on this album, I went about my daily activities and didn’t realize what I was listening to. The songs were not in any particular order as sometimes happens when things are downloaded and many of the classical pieces were first. They made me pause and look to see the titles, but when it came to the piece “Remember Me” I sucked in my breath and had to investigate further.

I grew up on military bases. My step father was in the Navy and you dealt with long deployments and families being fractured. Coping was what you did. As I really began to listen to this album and understood what Peter Jennison was really writing about, the tears began to slide down my face.

My brother was a Marine deployed to many of the same places and every time he was sent over, my heart lodged in my throat. The pride, the terror, the eventual homecoming and the birth of his child. It is all a coming home.
Peter Jennison along with some incredible folks from Imaginary Road have crafted an album that each and every person who has had someone in the military has to listen to. It brings voice to the emotion of both the soldier and the families that long for their return. The artists included in this album are: Charlie Bisharat (horn player), Jeff Oster (percussion), Jeff Haynes (Pat Metheny Group), cellist Eugene Friesen (Paul Winter Consort), Heather Rankin (vocalist), Will Ackerman (producer) and many others.

“Remember Me” is the first track on the album. Heather Rankin’s soulful voice joins the haunting backdrop of percussion and piano and the hair on my neck stood up. This song is for all who have lost a soldier to death, sealing them into the cold hard ground. For soldiers who have stood against great odds without fear only to give the greatest sacrifice a man or woman can give. Strength comes from home and home is where they return. This piece is the absolute highlight of the album and every time I play it, tears prickle in my eyes.

“Farewell My Friend” is for all those lost in the wages of war. Classical in tone, with tender strains of piano and violin, it sears into your heart and reminds you of those who have passed on in the name of God and Country-to protect and serve us all. It is bitter. It is sweet. It is the sound of sacrifice and blood spilling into the ground.
“A New Day” is the coming home. It is the tender feeling of seeing normal again after the reality of battle. It is the poignant strain of the violin as you look into the eyes of your son or daughter or wife as they wrap their arms around you in homecoming. It is the beginning of change. Such a beautiful piece and so full of hope and wonderment. Home…

Peter Jennison captures the evocative emotion of a soldier deployed overseas longing to be with his family once more. Listening to this album brought every war to mind and loss that always follows. The sacrifice made and freely given by our soldiers every day is so seamlessly given voice in this album. It will break your heart and set it soaring all at the same time.

Key Tracks: Remember Me, Farewell My Friend, a New Day