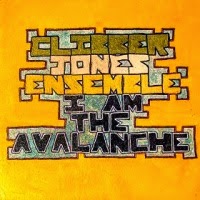 This release, I Am The Avalanche, by Clibber Jones Ensemble is certainly an album that I would probably not have come across, so yet again, I get to review a new release with no preconceptions of what to expect. The band has been described as a chamber rock band hailing from Atlanta and this release is the second to be issued by the band, following on from the 3 + 3 EP.

Musically the  band state that they produce a style which is unique, with Olivia Kieffer, the main person in the band, combining influences from minimalist classical composers to prog rock, early 90’s emo rock all coming together to provide the sound that is Clibber Jones Ensemble.


I Am The Avalanche is a 10 track release with a running time of around 25 minutes. The longest and shortest tracks on offer are “I Am The Destroyer” and “The Sun Upon The Earth” at 4:25 minutes and 1:30 minutes respectively.

The starting track, “I Am The Avalanche” (1:54) opens with staccato keyboards and a crystal clear voice that segues into the amazing smoky sound of a saxophone. Add in some piccolo and vibraphone and the track moves along in fine style. A relatively short track, it soon merges into “I Am The Destroyer” (4:25) which continues to build up the atmosphere generated by the opening track. More insistent drumming and a greater reliance on the keyboards and vibraphone is obvious and gives a more powerful sound to the track as it moves into a sound very like a harmonium. The track again morphs into the next track, “I Will Collapse Into The Sea” (1:36) which highlights the guitar and bass sounds with some very neat drumming by Olivia. The saxophone and flute trade riffs above the background before the vocals re-appear and the repetitive lyrics of “deep down” takes the track into “The Sun Upon The Earth” (1:30). Bass and guitar get another chance to shine before the re-appearance of that rich sounding saxophone. This is an undulating track which moves quickly into “I Am The Water Falling” (3:25) with a more insistent, and initially cacophonously shrill piccolo giving way to a short but intense drum solo by Olivia and the rest of the band re-join with some excellent touches, possibly on keyboards or keytar. There is a short vocal around a minute from the end and the saxophone ushers the track out.

The rest of the tracks on I Am The Avalanche, are instrumental versions of tracks 1-5 and allow the listener to fully appreciate the musical themes and skills that the band can generate.

In effect, what Clibber Jones Ensemble has released is an EP, or mini album, rather than a full album and I find it really difficult to describe the music of the band. Suffice, I think, to say that it is very different, and I felt, generated a feeling of inner peace. The music on I Am The Avalanche is atmospheric and unusual and requires a couple of listens for it to “grab” you. My advice is to give this release a fair hearing and then decide for yourself what you think, but prepare yourself for a fair bit of left-field uniqueness.

Key Tracks: I Am The Avalanche, I Am The Destroyer, I Am The Water Falling