Judas Priest In Concert At The Tsongas Center At UMass Lowell

Judas Priest In Concert At The Tsongas Center At UMass Lowell 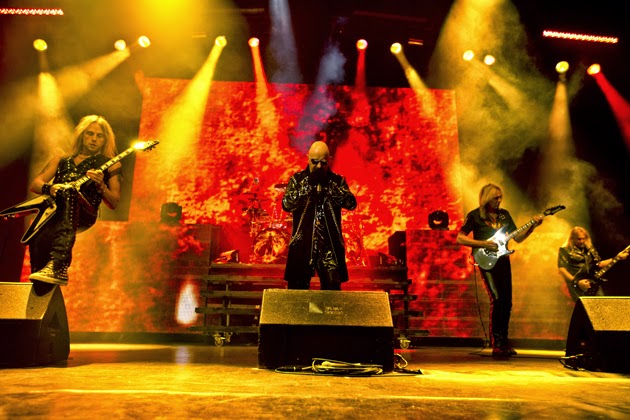 Priest, Priest, Priest…the familiar battle cry from an anxious crowd rings true whenever you attend one of their classic heavy metal concerts. This is the third time I have attended a Judas Priest concert over the last nine years. I can honestly say that every show was fantastic and the band has not lost a step in presenting the old and the new tracks from their enormous catalog.

This tour celebrates their recent release Redeemer of Souls album. After checking out their previous set lists I could see a definite pattern and knew what to expect. So much for expectations…what happened was they decided to mix it all up and provide a hungry audience with a diverse set list spanning the last 40 years of heavy metal. It was a nice surprise to hear songs I never expected to.

The traditional pre-concert song “War Pigs” only ran for a few minutes, not the usual full length before we could hear the Judas Priest guitars bursting out of the speakers. A huge curtain covered the stage while the band played and then it eventually dropped as they got the crowd into a metal fanatic frenzy with “Battle Cry.”

I was a bit surprised at the subpar turn out for this show. I expected a packed house however there were many empty seats around the venue and even more surprising were the gaps on the main floor where all the head bangers reside. We sat to the left of the stage looking down with an excellent view of all the proceedings.

“Dragonaut” introduced their new material in a live setting and it sounded fantastic as anyone would expect from a seasoned band. Richie Faulkner has stepped up to become the featured guitar player (in place of K.K. Downing) and his youthful energy is like a rock double cappuccino to get your blood pumping. His guitar playing is excellent and Glen Tipton seems to feed of that energy as they do the call and answer guitar licks throughout a show.

What can one say about Rob Halford?  It is beyond my comprehension how the man continues to sing like he does. His patented screams are legendary and as the night wore on I never heard him falter once, not even after repeated screams within one song. Who would have thought he would still have these abilities at 63 years old? He is a true star and phenomena of the metal scene.

As these heavy metal gods made their way through an impressive range of songs it reached a fever pitch between the audience and band. With Halford stalking the stage from side to side and Faulkner egging everyone on to clap in unison, it was a true team effort as band and audience became one huge wall of sound. It’s a beautiful thing to witness if you are a metal fan.

Old favorites such as “Hell Bent for Leather” and “Breaking the Law” drove everyone crazy with excitement and glee prompting those in attendance to sing along as requested by Mr. Halford. It was great fun and those are can’t miss numbers on any night. The song selection was excellent and well presented as I would have expected from this great band. It was well worth the trip for this music fan.

Halford and this band show no signs of slowing down at this point and that is good news for heavy metal fans worldwide. They are the keepers of the flame right now and continue to burn bright as ever.