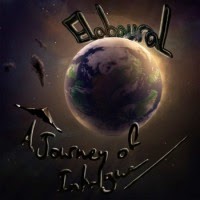 This album from the band Elabaural, A Journey of Intrigue, is most definitely a first. I receive many albums for review from both known bands and bands/artists that would have slipped under my audio radar and Elabaurel would fit into this latter category. What makes this particular band more unusual than most is that they hail from The Ancient One’s hometown, Kirkcaldy in Fife, Scotland.
Elabaural is a three piece instrumental prog metal band, formed originally as DepthCharge in 2003, but changed their name to Elabaural in 2005. This came about after the original band “lost” their vocalist, and subsequent material written was channeled towards instrumental music. At the moment the band are only a 2 piece as they are currently searching for someone to take over the drum stool, and I would hazard a guess that the two members of the band are related, as Arran MacInnes plays guitar and Alister MacInnes plays bass. The band have cited a variety of influences including Dream Theater, Opeth, Circus Maximus, Rush and Porcupine Tree.

A Journey of Intrigue is a 10 track album with a total playing time of around 71 minutes. The tracks vary a fair bit in length with 3 tracks in excess of 10 minutes, with track 4, “BlackJack,” the longest at 20:33 minutes and the shortest track on offer is track 6, “Adrift” at only just over the 2 minute mark (2:10).
The opening track on A Journey of Intrigue is “Genesis” (5:36) and starts with some superb solo guitar work with little phrases and runs before the cymbals give a little backdrop to proceedings and the bass notes become more regular. The track continues in the same vein and is hugely atmospheric. The whole sound changes around the 4 minute mark, becoming a more driving style with the drums and bass pushing the track along. An excellent starting track and bodes well for the upcoming tracks.
“Precipice” (4:47) is started with some atmospheric electronic beeps before the bass has a gentle passage, then the guitar slams into action. Just after the minute mark the driving guitar riff has taken over and there are passages which simply thunder along. I did find that around the 3 minute mark, my attention was beginning to drift a little as the track seemed to be losing a bit of direction. An excellent little guitar phrase drew the attention back, but then the track returned to earlier ground and was then off.
The third, and strangely titled, track, “Population, Montgomery”  (4:20) is more like the opening track with some exquisite guitar playing, backed up superbly by the rhythm engine within the band. Around the halfway point there is a very jazzy laid back feel to the track, which works well and this then builds slowly until the track takes it’s leave.
The other shorter tracks to be found on A Journey of Intrigue, “Adrift” (2:10), “Suspended In A Painting” (6:58), “Mind Cry” (2:17) and “Vorcha” (3:04), all maintain the listeners interest in different ways. “Adrift” succeeds by being an almost Spanish/classical styled guitar led track, “Suspended In A Painting” moves the tempo up a few notches highlighting more of the guitar playing by Arran, “”Mind Cry” is a slightly slower jazzy styled number and “Vorcha” is a slab of power chords and chunky guitar riffs.
The main disappointment I found with A Journey of Intrigue was that the long tracks, “BlackJack” (20:33), “Trial By Torrent” (10:15) and “The Raid” (11:27) tended to suffer a similar fate to track 2, “Precipice,” in that the interest level wasn’t maintained. All 3 long tracks show some excellent skill by the musicians, as witnessed in the short tracks, but stretched out to over 10 minutes the guitar/bass/drums complement didn’t provide enough of a variation to maintain the listener interest. Too many times I found myself waiting for a vocalist to take the track onwards.

An instrumental album of any genre needs to have something that makes it stand out, basically something that “grabs the listener by the throat and shouts Listen!” My personal opinion is that an instrumental album is a very difficult album to be successful with because of this.
For the most part, I found A Journey of Intrigue to be a very good debut album, as far as the short tracks were concerned and I would be keen to catch a follow up release to see where Elabaural are going as they show great potential. Arran can certainly handle a guitar and the supporting bass playing of Alister and drums, by person or machine unknown, complements the guitar work. The album has great atmospheric short tracks, and perhaps if the long tracks had been curtailed a little, bearing in mind the 71 minute playing time, and an album of length 50 minutes had been produced, I think I would have been better satisfied.
As always, the views I give are personal views and are likely to differ from many other people, so I would suggest giving A Journey of Intrigue a few listens and decide for yourself.
3.5/5 Stars
Key Tracks:  Genesis, Adrift, Suspended In A Painting
Jim “The Ancient One” Lawson-Sr. Reviewer Prog Rock Music Talk
October 16, 2014
Review Provided By Prog Rock Music Talk
Posted by Keith "MuzikMan" Hannaleck at 10/16/2014