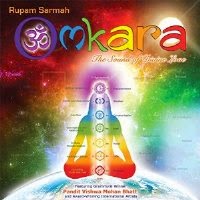 Rupam Sarmah is an engineer, director, singer/songwriter, Guinness World Record holder and an award winning producer. For over twenty years his music has touched people around the globe. Recently it was noted in Time magazine that Sarmah had the most musicians present in an orchestra. His mission is teamwork to make the world a better place for humanity and peace for all.
Music and healing have been hand in hand for as long as people have been on this earth.  Sarmah has compiled an impressive list of contributing musicians inspired to share their gifts with the world. Using the chakra system, the album is linked to each of the seven stages, the final track being a journey from birth to enlightenment.
Contributing artists are: Grammy winners Pandit Vishwa Moham Bhatt, Laura Sullivan and Brian Vibberts. Also a part of the album are Grammy artist Rocio Marron, Padmashri Sumitra Guha, Pt. Subhen Chatterjee, Shayna Young, Matthias Muller, Jonathan Kay and others.
“Power-Solar Plexus Chakra” is the third track on the album and deals with transformation. The myriad of instruments whirl around you, bringing to life a vortex that sweeps you in. Change is part of life. Taking the next step and becoming who you are meant to be can be a frightening thing. This track in particular held a resonating factor for me as I embark on a new life journey with my job and writing career. The texture of the piece is a well woven basket of sound, structure and complex composition that I could listen to for hours on end (and have.) It features the incomparable Pandit Vishwa Mohan Bhatt among others.
“Communication-Throat Chakra” is the fifth chakra. It is centered on communication and intuition. Melodious with flute and other instrumentation, this piece features Pandit Vishwa Mohan Bhatt and other artists and combines a Western style musical experience with Indian Raga. The past and present collide in a vision of world peace and the love and appreciation of all peoples. It is a lighter than air piece with wispy sounds and the curling smoke of fine instruments and vocals done well.
“Heaven Bridge- Enlightenment” is a journey of birth and a life spent in contemplation of the final state of enlightenment. Celestial in its composition, Indian music again meets the West in a seamless composition of classical and World music. Multiple instruments craft a healing sound that transcends time and place and at the longest track on the album of twenty three minutes it is an unstoppable force of subtle qualities.
At one hundred and five minutes of music with Indian Raga, Western sounds and World music, this album is being used in conjunction with therapy programs in numerous disability and cancer treatments. It is well known that sound can influence mood and in some cases can be an influencer against pain, depression and disease. The artists in this audible chakra journey lead us on a path of deliverance and uplifting sound that will stay with you long after the last note is done.
5/5 Stars
Key Tracks: Power-Solar Plexus Chakra, Communication-Throat Chakra, Heaven Bridge-Enlightenment

Based on Classical melodies with Influence of Kafi Bhimpolashi Raga, Classical, Western and World Music