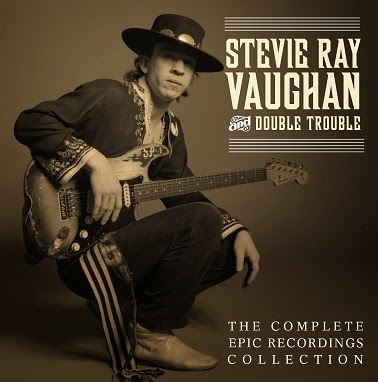 A definitive career-encompassing 12 disc library, The Complete Epic Recordings Collection brings together, for the first time, the entirety of Stevie Ray Vaughan and Double Trouble's official studio and live album canon including the inaugural commercial release of A Legend In The Making, a highly collectible (formerly) promotional only recording of SRV & DT's incendiary performance at Toronto's El Mocambo club in 1983.

Stephen Ray Vaughan was born in Dallas, Texas on October 3, 1954, the same year the Fender Stratocaster went into production.  Stevie Ray picked up his first six-string at the age of 7, dropped out of high school in 1971 and moved to Austin in '72, going on to become one of the most influential and electrifying blues guitarists ever.  After honing his chops in a variety of bands throughout the '70s, Stevie Ray formed his own group, SRV & Double Trouble, in 1978.  Hellbent and intent on revitalizing the blues for contemporary audiences, Stevie Ray served as the power trio's charismatic frontman and evangelical electric guitarist, driven and underscored by drummer Chris Layton and bassist Tommy Shannon.

Stevie Ray Vaughan died in a helicopter crash on August 27, 1990, following an awe-inspiring performance with Double Trouble and Eric Clapton at the Alpine Valley Resort in Wisconsin.  Though his mainstream career lasted a mere seven years, Stevie Ray Vaughan's enduring contribution to the blues can be heard in the work of younger players including John Mayer, Derek Trucks and Mike McCready of Pearl Jam.

Stevie Ray Vaughan was the recipient of numerous musical awards, during his lifetime and posthumously.   In 1983, readers of Guitar Player voted him as Best New Talent and Best Electric Blues Guitar Player. In 1984, the Blues Foundation named him Entertainer of the Year and Blues Instrumentalist of the Year, and in 1987 Performance Magazine honored him with Rhythm and Blues Act of the Year. Earning six Grammy Awards and ten Austin Music Awards, he was inducted into the Blues Hall of Fame in 2000 and the Musicians Hall of Fame in 2014. Rolling Stone ranked Vaughan as the twelfth greatest guitarist of all time.
Posted by Keith "MuzikMan" Hannaleck at 9/04/2014