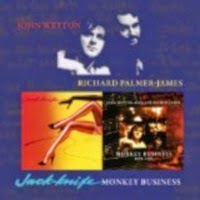 John and Richard were together in King Crimson for a couple of years, 1973-1974, during which time they collaborated on 3 albums, Larks Tongue in Aspic from 1973, Starless and Bible Black and Red both from 1974. The album Monkey Business, contains leftover items from that era with demos (and out-takes) of songs that would appear on the albums and live recordings and the second album, Jack Knife, contains the results of late 70’s sessions by both musicians. Also putting in an appearance on much of the King Crimson material is the, now retired, Bill Bruford who had just left Yes to join King Crimson in 1972.

Monkey Business is a 21 track album with a running time of around 52 minutes. The longest track on offer is the last track, “Starless 1977,” at 5:38 minutes and there are, since these are demos, out-takes and live tracks, 7 tracks that last under a minute. Jack Knife is more of a “normal album” in that it comprises 9 tracks with a playing time or around 37 minutes with again, the last track “Adoration,” the longest at 6:11 minutes and the second track, “To Much Monkey Business,” the shortest at 2:27 minutes.

Monkey Business is the sort of album that fanatical King Crimson followers add to their collection to ensure that it is complete. It is interesting to hear the earliest versions of some of the tracks and to compare them to the finished article and the “tracks” such as “Flourish,” “False Start,” “Untitled,” “Starless 1,” Laughing Lake 2,” “Laughing Lake 3” and “Starless 2” certainly add to the atmosphere of the album, with all being under 60 seconds.

What Monkey Business is not, by any stretch of the imagination, is an essential buy for the majority of discerning listeners. It isn’t really an insight into the workings of King Crimson, but does show the evolution of some of the material and as such, might be of interest to some people.

Jack Knife, which was released under the name of Jack Knife, is produced from a later 70’s session with John and Richard with Curt Cress (drums) and John Hutcheson/Kristian Schultze (keyboards). This contains a selection of mainly blues based material with tracks from Sonny Boy Williamson, Willie Dixon and John Lee Hooker. The choice of tracks is satisfactory and I enjoyed most of the tracks without ever being “blown away” at any point. Both the “oldies” and the Wetton/Palmer-James penned songs are well played, and interestingly enough, the track “Too Much Monkey Business,” appears on both discs, and both are live, and sound identical.

My advice would be to give it a few listens, but it is a release that having listened to for a couple of weeks for review, I probably wouldn’t specifically dig it out again. The stars awarded are more for the historical value than the actual music presented.

Key Tracks: Too Much Monkey Business, Eyesight To The Blind, Walk On Heaven’s Ground

Jack Knife:
I Wish You Could
Too Much Monkey Business
You Can’t Judge A Book By The Cover
Confessions
Eyesight To The Blind
Walk On Heaven’s Ground
Dimples
Mustang Momma
Adoration