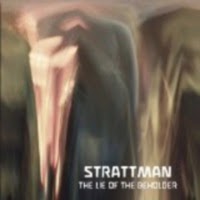 Roy Strattman is a multi-instrumentalist and composer and his debut release, which has just appeared on my desk, is entitled The Lie of the Beholder. I did think that I had come across the name before, and with a little searching, I realized that Roy is the guitarist and joint composer in the prog band, Little Atlas. Little Atlas have issued 4 albums to date and the Ancient One was lucky enough to review the latest, Automatic Day.

The record label describes Roy’s music as “a tour-de-force of cutting edge progressive rock, complex tense and shot through with dark and menacing textures alternating with unexpected stabs of beauty and organic calm.” The Lie of the Beholder therefore has a lot to live up to, and I have been tasked with deciding whether or not the album has been successful.

Although The Lie of the Beholder is a solo album, Roy, who plays guitar, keyboards and sings, did have a little help along the way. The album also features Nick D’Virgilio from Big Big Train on drums, Ricardo Bigai from Little Atlas on bass, together with a guest appearance from Steve Katsikas, also from Little Atlas, on piano and cajon. The cajon is a 6 sided box shaped percussion instrument from Peru.

The Lie of the Beholder is an 11 track album with a total running time of around 56 minutes. The longest and shortest tracks on offer are track 3 “A Candle in the Sun” and track 4 “Jaded,” playing for 7:40 minutes and 2:33 minutes respectively.

Opening tracks on any album have a tremendous job to do, in that they pave the way for the rest of the album, so how does “A Better World” (5:59) fare? The track opens up with some Spanish style guitar, the atmosphere changes via a spacey section with “astronaut” voices then the track explodes a la Porcupine Tree/IQ before settling back into more delicate Floyd style areas. This is both a hard hitting track and a laid back track neatly packaged. Synths, mellotron and urgent/angry guitar slashes permeate around a very “Gilmouresque” vocal section. “A Better World” is an opening track that that promises the listener that they are about to hear an amazing album.

“Caught inside the Rain” (6:11) is more psychedelically styled and contrasts the opening track beautifully. More mellotron and those urgent/menacing guitar riffs drive the third track, “A Candle in the Sun” (7:40) which is a hugely atmospheric slab of a track effortlessly shifting from the gentler to the more urgent areas.

Two shorter, out and out rockier tracks follow in “Jaded” (2:32) and “The Scene of the Crime” (3:29) before another shift in direction raises its head in “Detonation” (5:11). A very gentle introduction belies the ruthless assault that is impending. Terrific guitar over keyboards suddenly ascends vertically into a heavy workout for the band. A beautiful vocal settles the proceedings down, but the “darker” side bubbles away in the background before reappearing. This is an imaginative track that sweeps in and out of the dark and light areas.

Almost right on cue, there is another diverse move in the music into an almost pastoral styling with “Solace” (5:35) which highlights acoustic guitar and flute/mellotron. This is a very melodic track which stands apart from the rest, simply because it is so different. This is followed by the title track “The Lie of the Beholder” (6:05) and we have re-entered the “darker, more menacing” side of the band, before a more gentle outro passage which seems to end very abruptly, but as the following track is “Connection Lost” (3:51), perhaps it is an attempt at some wry humor.

The penultimate track, “No Way Home” (5:48) is accessed via a beautiful acoustic guitar and electric guitar passage, great vocals, and just after the minute mark, an elevation of the sound before a return to the intro themes. Another step into the rougher side of Strattman, then slides back into the gentle phases and wheels back and forth. This track is another example of a powerful piece of writing and playing.

A very mellow, almost understated track, “The Fire Dies” (3:48) sees the album out. Slower and certainly catchy, this is perhaps an unexpected ending to The Lie of the Beholder, but one which seems to work in all sorts of ways. This track seems to wrap the album up in such a way, that you want to reach out and press play again and settle back for another run-through.

The Lie of the Beholder, which seamlessly moves from light into shade and tranquil into heavy, shows that Roy has not just made another Little Atlas album and called it a solo album, he has shown that he can provide a very different atmosphere.

The Lie of the Beholder is an album that gets inside your head within a few listens and certainly merits both the “One to Buy” and “The Experience will last Forever” stickers on the cover. The advice is to give the album a few listens and then smile happily as you part with some of your hard earned cash without any regrets.

Key Tracks: A Better World, Candle In The Sun, The Fire Dies

Tracks:
A Better World
Caught Inside The Rain
A Candle In The Sun
Jaded
The Scene Of The Crime
Detonation
Solace
The Lie Of The Beholder
Connection Lost
No Way Home
The Fire Dies