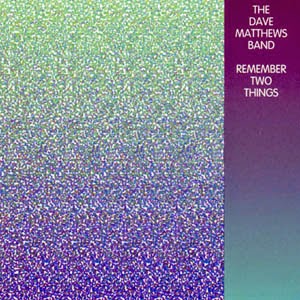 The Dave Matthews Band is one of those groups that simply cannot be compared to anyone else. Their unique blend of funk, jazz, and rock has been captivating audiences for over two decades. It all began with 1993’s independently released album Remember Two Things, which has been reissued to celebrate the debut that got the ball rolling for these legendary musicians.
The album kicks off with an early version of one of their most recognizable tunes, “Ants Marching.” Many of the songs you will find on this album are older versions of tracks found on their major label debut Under the Table and Dreaming (UTTAD), while others are staples of the set lists that you will find on their numerous live records, such as “Seek Up” and “The Song That Jane Likes.” Remember Two Things truly sets the stage for DMB’s future, with most of the songs being live recordings. And in trademark DMB fashion, this album is full of jams, funky breakdowns à la “Recently,”  with Carter Beauford’s frantic drumming, Boy Tinsley’s frantic violin sections, and LeRoi Moore’s groundbreaking saxophone playing.
After you think you’ve heard all the craziness the Dave Matthews Band has to offer, the album ends with two live acoustic tracks. “I’ll Back You Up” and “Christmas Song” (both featuring Tim Reynolds) show the versatility of Dave Matthews as a songwriter. This reissue also comes with two bonus tracks that anyone, especially the diehards, will appreciate – early versions of “Pay For What You Get” and “Typical Situation,” the latter which clocks in almost two minutes longer than the standard version found on UTTAD.
Although the album stands alone as a fantastic release, I believe it is only a stepping stone into the DMB world. Hearing how tracks like “One Sweet World” and “Seek Up” sounded in their earliest renditions is breathtaking, considering how much the songs how evolved over years of playing them live. The included bonus songs are wonderful additions to the track listing also, which makes me wonder why they were even outtakes. For diehards, the reissue of Remember Two Things is a must have. For everyone else, it is a perfect introduction to the band, if you’ve waited this long to delve into their expansive catalog.
5/5 Stars
Key Tracks: Recently, Seek Up, Christmas Song