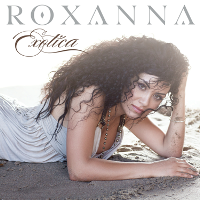 What do you get when you combine the power of healing with a pop singer? Roxanna. Bursting into the music scene after only two years in the business, her debut album Exotica is a breath of fresh air, reminiscent of Gloria Estefan, Christina Aguilera and Selena. Soulful velvet vocals blend with eloquent flamenco, Spanish and Middle Eastern flavors. Born in Iran, Roxanna learned at an early age to use music as a soothing influence. As she pursued her career in nursing, she felt there was something missing. That something was music. Mark Portmann, known for his work with greats like Annie Lennox and Christina Aguilera discovered her voice and a dream was made into a reality.
“Unforgotten” is based on the true story of Roxanna being left at the altar six days before she was to be wed. Wind and chimes blow, joined by piano and soaring vocals. Heart broken, staring at her wedding dress and never to look at a florist shop the same way again, Roxanna laments what could have been. Written with Portmann, this piece is heartfelt and about a real person that audiences can connect with. Life is messy. Heartbreak is real and it lingers on but like every song on the album, there is hope.
“Close Your Eyes” is the dark night of the soul brought to life. We have all been there. Utterly alone in a crisis wondering what the hell just happened. This song brings a source of light to souls in despair. Soaring vocals take you from sorrow to sunrise, ready to search for the silver lining. The song was developed from Roxanna’s time as an RN and was co-written by Lindy Robbins and Portmann. People want hope in difficult times and as a nurse, it gave Roxanna joy to do just that.
“El Amor” was a cover made popular by Roxanna’s muse and inspiration Julio Iglesias. It is high on the flamenco and Spanish flavor, a twisting, sparkling gypsy song that makes you want to move your hips and pretend, just for a moment that you are on a stage somewhere with castanets in hand, a swirling dress swinging around your ankles. (At least for me anyway. Girl.) The vocals are entirely in Spanish, a beautifully fluid language that shares the essence of love.
Roxanna is indeed following in the grand footsteps of music greats like Gloria Estefan and Annie Lennox. Her voice covers all ranges and is an inspiration for people with dreams the world over. Yes, it is possible to be your heart’s desire. Using her music to heal stems from her childhood and her work as an RN. Exotica is a splendid first album with many cultural elements combining to give us a look at what this young and talented woman has to offer the music industry. I for one will be watching and listening.
4.5/5 Stars