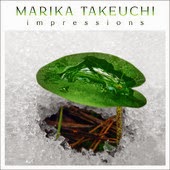 When you begin studying classical music at the age of three there is a good chance that by the time you are an adult that you could be making your own adaptations of classical scores or creating your own. In the case of Marika Takeuchi she came via Japan to Boston to study film scoring at the esteemed Berklee College of Music in 2009. Since then she has released two albums, Impressions being her second with a third release coming this fall.
The release clocks in just over 26 minutes however it does make its mark in a prolific manner. Through 10 tracks Marika paints a canvas of beauty and elegance with the ivory keys. Truthfully all the lady needs to do is sit on the piano stool and play. The end result of what she creates is absolutely gorgeous and serene melodies that would relax the most frazzled human.
This is a soundtrack made in heaven; it makes you feel relaxed, spiritual and whole. I agree with the artist, music is healing. It has helped me my entire life, it makes laugh, cry, reminisce, and get in touch with my inner being like nothing else can. Marika has the magic touch with her fingers, almost as if she is channeling an entity that that comes from a higher plane of consciousness. I know for certain her music will allow you to reach that level of existence.
Although it’s a rather short journey the tracks blend into each other, each taking you one step closer to that spiritual plane that allows complete clarity and peace. Music such as this can have many valuable assets and for this listener there were a multitude of things to appreciate. Some albums are boring if one song follows another too closely; with this recording it was more of synchronicity and flow that made everything just perfect. I normally like to choose three key tracks but in this case I felt there was not one track that stood out amongst the rest, it was rather the entire recording as a complete body of work that impressed me.
Marika Takeuchi is an incredibly gifted and talented musical visionary that has an amazing future ahead if she continues on her path of creativity and enlightenment.