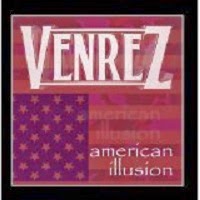 Venrez is an L.A. based rock band. That doesn’t mean as much these days as it once did, but Venrez still reminds me of the bands one thinks of when they think of L.A. rock. Bands like The Doors, Guns N’ Roses, and Van Halen just to name a very small few. While there are still great bands coming out of the City of Angels, not many of them rock, but Venrez is doing all it can to change that.
This is a quintet led by Venrez on vocals, Jason Womack and Alex Kane on guitars, Michael Bradford on bass, and Ed Davis on drums. Collectively they are an experienced bunch as members of the group have played with the likes of Juliette Lewis and the Licks , as well as Life Sex and Death. With one album to their credit already, 2012’s Sell the Lie, American Illusion looks to keep moving this band forward.
From the opening beats of Davis’ drums on “Unforeseen” American Illusion rocks. Guitars reminiscent of Alice In Chains come crunching in, and the track just wails. It’s clearly the guitar rock that many of us having been craving. I have to agree with Venrez, this is my favorite track on the album. There are several that aren’t far behind it though, “Hot Air” and “Silver and Gold” to name a couple. And guitar solos are back! It seems that most new bands these days refuse to solo, but definitely not these guys. “Vultures” provides an awesome example of this, but you will find many on here. From start to finish, American Illusion definitely brings the rock. It never really lets up, which may be a criticism for those that need to take a breather, but you’ll have to wait until closer “Temptress of the Moon” for that.
American Illusion is a strong rock album. There are times when Venrez’s vocals don’t fit though. He has limited range so the backing vocals and effects enhance this, but occasionally they need a little more help. That aside, the lyrics were good, and the music will cure what ails many a rock fan. Being that Venrez has been touring with the likes of Alice Cooper, Slash, and Buckcherry, I think many a rock fan already agrees, and I am sure more will follow.
4/5 Stars
Key Tracks: Unforeseen, Vultures, Temptress of the Moon
Kevin Kozel
March 13, 2014

Upload your music for free at ReverbNation.com
Posted by Keith "MuzikMan" Hannaleck at 3/16/2014