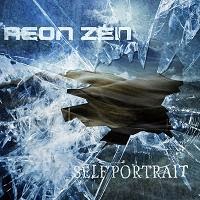 Last January, Aeon Zen released their critically acclaimed third album, Enigma.  I called it “a phenomenal album” that was “a masterful blend of genres and creativity” and their latest release, the EP Self Portrait, continues in this trend of amazing musicianship. Consisting of Rich Hinks (vocals, guitar, bass, and keyboards), Andi Kravljaca (vocals), Matt Shepherd (guitar), and Steve Burton (drums), Aeon Zen is nothing short of wildly impressive as they climb to the top of the progressive metal scene. At just under twenty minutes long, Self Portrait exudes the effort of a full-length release that is sure to keep Aeon Zen’s star a rising one.
Self Portrait is a truly dynamic work showcased by the creativity and fiery passion put into each song with not a second of waste. It has the type of music that needs time to soak in, requiring multiple listens to experience everything that is going on in the songs. Self Portrait keeps Aeon Zen going in the right direction after Enigma. The elegant “Psych!” is short and sweet, clocking in at just over two minutes long. Its hard and crushing sound is backed by a sparse and soothing vocal effort. “Portrait” leaves everything on the floor. It comes out with a punch and keeps the adrenaline pumping with dazzling keyboard sections and death metal growls.
The somber ”Rain” is a beautiful song. It builds a dreamlike and poignant display of music like rolling clouds passing overhead on a spring day. It is the most moving song that pulls on the heartstrings. The mini-epic “Demise” closes out Self Portrait. It is a song filled with attitude and great manic energy and the melodic chorus complements the aggressive display of power in the music. The song is so good that its run-time is easily forgotten. The music is so enchanting that time just slips away.
Not only is Self Portrait another phenomenal release from Aeon Zen, but it is also a good introduction to the type of music that they play. They are operating at a spectacular level. They have their sound and the way they handle their music gives off that type of confidence that is found in a master artist. If you are into progressive metal, then there is no excuse not to know the name of Aeon Zen.
4.5/5 Stars
Key Tracks: ALL
Brian McKinnon
March 9, 2014
Posted by Keith "MuzikMan" Hannaleck at 3/09/2014