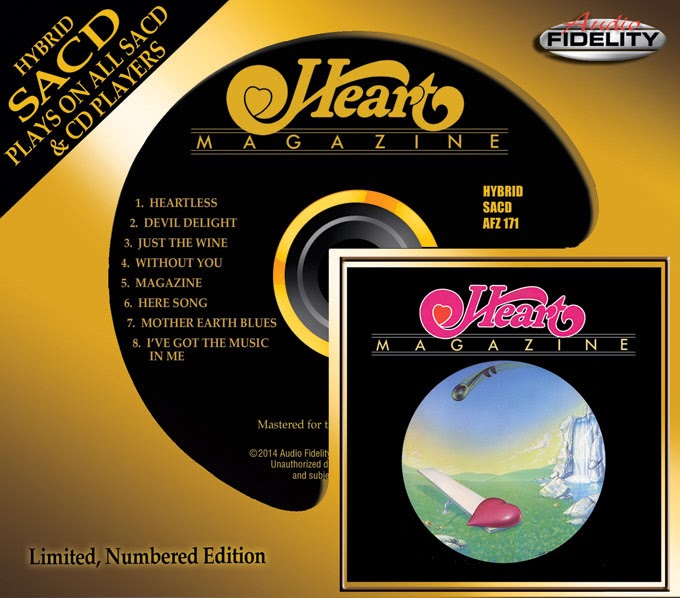 “A rare gem...Evocative and controversial”

Camarillo, CA - Heart fans are ecstatic with the release of the band's evocative and controversial second album 'Magazine' on Hybrid SACD by Marshall Blonstein's Audio Fidelity! 'Magazine' shows Heart while they were still an idealistically young band, before they became such a worldwide phenomenon. Their second album shows the same impassioned songs that marked the band's debut, 'Dreamboat Annie'. They were really hard rockers back then. Ann and Nancy Wilson wove a tapestry of gypsy meets modern woman, and it is highly involved in the early songwriting. The album features a mix of ballads and straight out rock-blues-metal at its purest.

'Magazine' was recorded in 1978 and was a victim of legal hassles with the label that delayed its release, yet the album boasts a mix of light and heavy tracks that are pure Heart. There's the rockin' “Devil Delight” and the bluesy-rock stomp of “Heartless” - one of their best songs ever! There's the beautiful, sweet acoustic moment of “Here Song” and the smooth “Just The Wine” and the Badfinger cover “Without You” - Ann's vocals are incredible; she has the chops to belt out like Janis Joplin! There's the pure, slow and chugging blues of “Mother Earth Blues” and the stomping live recording, “I've Got The Music In Me.”

Heart's 'Magazine' eventually went platinum and peaked at #17 on the album charts, and the album's only single “Heartless” landed in the Top 40.

Tracks include:
Heartless
Devil Delight
Just The Wine
Without You
Magazine
Here Song
Mother Earth Blues (live)
I've Got The Music In Me (live)