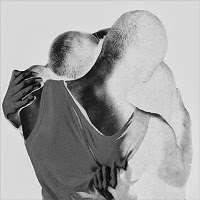 Young Fathers is a group that isn’t the easiest to label. I mean this in a very good way. What I most often see them labeled as is “Alternative Hip-Hop” so I guess we will go with that, but they remind me of artists like Tricky/Massive Attack, TV on the Radio, and Shabazz Palaces, just to name a few. They have released a couple of EPs up to this point, 2011’s Tape One and 2013’s Tape Two, and now release a full-length, Dead.
Part of what makes Young Fathers so interesting lies in their diversity. The trio is based in Edinburgh, but only ‘G’ Hasting has spent all of his years in Scotland. Alloysious Massaquoi is Liberian, while Kayus Bankole has Nigerian parents and spent several years in both the U.S. and Nigeria before returning to Edinburgh. The uniqueness of its members clearly has influenced Young Fathers sound and makes them distinctive because of it. While hip-hop tends to be the easiest way to define the group, elements of trip-hop, indie rock, reggae, electronic, and African rhythms all contribute to their songs. Listening to the two singles from Dead, “Low” and “Get Up” it’s easy to notice that there is something different about what Young Fathers are bringing to the table. Amidst all of these styles the band still finds ways to add catchy lyrics and choruses.
For music lovers, Young Fathers is definitely worth checking out. Hip-hop lovers may feel that they are not hip-hop enough, though those that dislike hip-hop may find that they are still very much a hip-hop band. Their uniqueness makes them very interesting for those looking for something different, but for the less adventurous there very well may be too many influences in one place. These are certainly not issues for me as I find Dead to be a fascinating album and Young Fathers a group full of intriguing possibilities for years to come.
4.5/5 Stars
Key Tracks: Low, Get Up, I’ve Arrived
Kevin Kozel
March 24, 2014
Review Provided By Write A Music Review