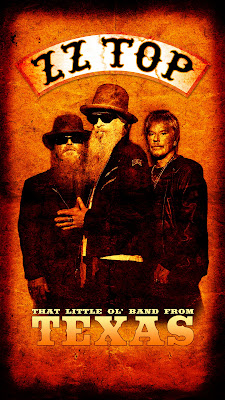 That Little Ol’ Band From Texas is a documentary of three men from Texas that grew up listening to the same radio stations. Billy Gibbons (guitar, vocals), Dusty Hill (bass, vocals) and Fran Beard (drums) eventually became the international superstars ZZ Top. This is their story from the beginning.

This Blu-ray/DVD set is a no-fluff story that gives you all the important facts that made ZZ Top who they are. And 50 years later the same three men are together as the longest-standing rock band in history. They never had any new members join or leave. I would have to say that they rate right up there with some of the best rock trios like The Jimi Hendrix Experience and Cream.

They took chances, experimented with their music and partnered with all the right people, and everything just fell together. Not to mention, of course, being around when MTV became a phenomenon and they released Eliminator with some very eye-catching colorful videos.

I learned so much watching this film, things I never knew before. It made me realize the long history and beginnings I never realized. I have always been a fan of the band, not a huge fan mind you, but enough to be curious enough to want to know more. My introduction to them was in the 70s when I heard Fandango for the first time then Tres Hombres. I was sold and those two releases remain my favorites to this day. It was in that period I should have caught them live but never did. Fortunately, they are still touring so maybe I can catch them live before they hang up their boots once and for all.

I enjoyed the up-close jam sessions presented in Gruene Hall with just them and the people shooing the videos. I also enjoyed the footage of the early years and the concert clips. Once I got to the bonus section the clips became the full performances.

50 years is a long time to do anything or be so close to anyone, regardless of what your profession is. Even though they are legends they still consider themselves blues interpreters and it looks as though any of their success has changed them much. They come across as down to earth men from Texas that have had a very successful career that genuinely appreciate everything they have gained over the years.

That Little Ol’ Band From Texas gave blues a bigger name and more respect than it ever had. It was a joy to watch the film and it held my interest from beginning to end. That is a win any day of the week and if you appreciate the music of ZZ Top you’re going to love this Blu-ray/DVD set.