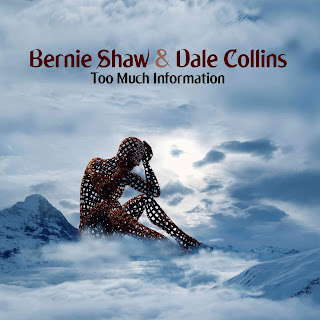 Kicking off the album Too Much Information, Bernie Shaw is very bright and uplifting as "So Many Times" begins. The album reminds me a lot of the band Journey and their unique sound to 80's Rock. Longtime friends Bernie Shaw and Dale Collins team up to produce an album of seismic proportions. With the assistance of Ron Restall on drums and Jason Gardenits on the keyboard, the perfect blend of Blues and Progressive Rock chemistry.

The depiction of the artwork can be interpreted as a dawn of a new day, or as the light in the sea of gray. It sizes up to the tone of the record as it avails the roughness of the waves and the heaviness of songs like "Alone" and "Hey Jimi," while that glimmer of light shone beyond the sea reflects on a more positive note of "Here We Go" and "Rock On."

Running back on "So Many Times," the song captures a lighter side of Bernie Shaw, where he typically adheres to more of an intense Metal sound. It is an excellent battle between letting the light in, feeling good, and thinking there was more one could have made a better choice along the way. "Alone" is an immediate stark contrast. The song proclaims how the singer will now be operating daily life on his own, he cannot continue to carry the weight of his other half with no sign of change or improvement.

"Here We Go," keeps the beat of every traveler's anthem. However, the song speaks of an irritating, repetitious situation that he finds himself caught in the middle of. To me, it feels very much like hiking up an endless trail or mountain; albeit, it even reminds me of the scene in Rocky, climbing the Philadelphia stairs.

"Too Much Information," the title track, is a great bridge-like track. It is not too detailed or overly emotional. Rather, it is a pleasant earworm for guitar lovers everywhere. Contrary to the title, it doesn't feel like overload at all. I probably stand alone in this thought, however, it is nice to see an artist not make the title of the album his or her main focus.

We turn now to a darker note, but, it turns out to be my favorite track of the album. "Sad Song" possesses a great blend of Shaw's vocals and both Shaw's and Collins' instrumental technique. The song has a great way of rocking like the sea, building up like a solid wave and crashing into the shore, at the height of Shaw's chorus lines.

An excellent ode to the late, great Jimi Hendrix follows up a solemn track. Upon initial listening, one is safe to assume, this might be a more somber or even heartwrenching tribute. As the song progresses it is anything but. The song calls out to the spirit of Hendrix and does his honor well by majoritively dedicating this track to being an instrumental piece. One of the great kings of Rock music would be jamming right alongside Shaw and Collins if he were able to hear this today.

"Just A Little Bit" is a great in-your-face anthem of how someone can just try to break another person down in every possible way. The person being tormented wants nothing more than to see the damage right in front of their face. You can tell as the song progresses, the singer won't let this irritation get the best of him and builds upon the harm caused by the other party.

With that rise-from-the-ashes tune, we arrive at the final song of the album, "Rock On." It is a steady, fun track emphasizing the carefree spirit of the duo. The song solidifies what every musician, band, and concert-goer have in common; and that's to simply – rock on. When everything around you seems to be on sensory overload or you might just be feeling a bit down about something in life, the message is clear; rock on with Too Much Information.