New Book on Legendary Proto-Metal Power Trio BANG "The BANG Story: From the Basement to the Bright Lights" Now Available! 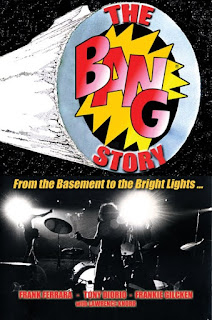 “The BANG Story: From the Basement to the Bright Lights” by Lawrence Knorr, Frank Ferrara, Tony Diorio, and Frank Gilcken

In the summer of 1971, BANG, a trio from the Philadelphia area, decided to take a road trip to Florida to try their fortune. While buying some rolling papers in the Sunshine State, they learned about a Small Faces and Deep Purple concert nearby in Orlando. They showed up at the venue and brazenly declared they were ready to go on stage. The concert organizer asked them to set up and play for him. After a couple songs, he told them they were opening for Rod Stewart and Small Faces. Before they knew it, BANG was playing with Bachman Turner Overdrive, Deep Purple, Three Dog Night, Fleetwood Mac, Ike and Tina Turner, The Doobie Brothers, and even Black Sabbath. Capitol Records signed them, and three LPs were released. Join Frank Ferrara, Tony Diorio, and Frankie Gilcken, as they recall their rapid rise to fame, playing with numerous Rock and Roll Hall of Famers.

The 1971 self-titled debut album “BANG” is considered an important forerunner to the early Doom Metal genre. Undoubtedly one of America's heaviest 'proto-metal' bands from the period, BANG also had a strong sense of melodic power. The band's versatility and songwriting skills are second to none. Highly regarded as a cult act by many for years, it’s now time for this truly amazing rock band to be enjoyed by a new audience worldwide!

Excerpts from the book:

“Those were the days when everything was experimental,” said Karl Richardson, the engineer. “We were looking for something more reverberant. We didn’t want BANG to sound like everybody else. In those days, records were more like paintings, than photographs. The studio was a palette, and we were always thinking about art—not just taking a picture.”

OZZY Cheesesteak anecdote … ON WEDNESDAY, MARCH 1, 1972, BANG was back in Fayetteville, North Carolina, to play with Black Sabbath, who was in the midst of their Master of Reality Tour. Wild Turkey was to open this evening, followed by the boys from Philly. That afternoon, the band was hanging out with Ozzy Osbourne and Geezer Butler from Black Sabbath. They offered to introduce them to cheesesteaks, having discovered a sandwich shop in town that was attempting to replicate their favorite Philadelphia cuisine. “I’ve never had a bloody cheesesteak,” admitted Ozzy. And so BANG introduced the Prince of Darkness to the delicacy. After chomping on a few bites, he asked, “I have another question for you. What do the fans mean when they are making the “V” signs with their fingers? For our Churchill, it meant victory.” “To them it means one of two things,” answered Frankie. “It either means peace or boogie.” After that, Ozzy would often be seen on stage flashing dual V-signs to all of his audiences, as captured on the cover of their next album Vol. 4.

Finnish label Svart Records is released BANG's 4 classic records: “Death of a Country,” “BANG,” “Mother/Bow to the King,” “BANG Music.” They were re-pressed on both vinyl and CD: http://www.svartrecords.com/

BANG has made available free ringtones! Free Frank Gilcken guitar solos for iPhones and Androids! http://www.bangmusic.com/ringtones/ Also, all BANG songs are now available for 99 cents mp3 downloads http://www.bangmusic.com/shop/mp3s/ BANG's complete recorded catalog is available as well through their website, which includes the band's latest CD releases “Return To Zero” and “The Maze.”

Also the website contains never seen videos of BANG! http://www.bangmusic.com/videos/ including the “BANGstory” video a must see: