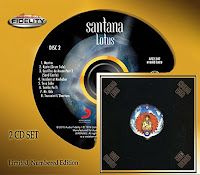 I want to start by saying that I am big fan of Santana and most of his musical output. I have a lot of his catalog at my immediate disposal. I have also been one of those people that believe his earlier lineups were the most original and progressive. I personally enjoy the first three albums the most, which enabled me to appreciate everything that came after that in different ways. With a new set of ears and looking inward spiritually, I would consider what he was presenting. When he started getting more commercial is when many people may have lost interest. I think I have heard one album that I thought was mediocre in over 30 years, so not a bad track for my listening tastes. This is my preference and opinion of course. To each his own as they say.

Anyone familiar with Santana knows about Lotus. As notated on the Audio Fidelity site: Lotus is a 1974 live album by Santana, recorded at the Osaka Koseinenkin Hall, Osaka, Japan in 1973. It was originally released in 1974 as a triple vinyl LP in Japan only.

A little history regarding the release as follows:

The first U.S. release was in 1991 as a 2-CD set. Lotus has been re-issued on vinyl in the Netherlands and on CD in Japan in 2006 as a 3-CD set. It was also re-issued as a 3-LP set in the U.S. in 2013, and as a 3-CD hybrid SACD with seven previously unreleased bonus tracks in 2017 (a very high priced set). So, it is safe to say this recording has gone through several iterations since its inception a and has stood the test of time as one of the greatest live albums ever recorded.

Now we have the superb version issued by Audio Fidelity, a two-disc Hybrid SACD that brings the concert to life with a crisp robust remastered take on the legendary performance. Santana Mark II was a continuation of the Mark I sound that was a melting pot of Latin-World-Rock-Blues-Jazz Music.  It was extremely innovative and one of the progenitors to the World Music that would arrive in the future. Some of the players switched seats however their sound remained intact and this release proves out that fact repeatedly.

Santana has influenced many musicians over the years however it is the early distinctly original rock fusion he presented that paved the way too many inroads into music then and today. I got into the early Santana music after I had already absorbed Return to Forever, Al DiMeola, Jean Luc-Ponty etc. So, for my journey it was a logical transition and very enjoyable I might add.

Santana was like Hendrix, melding several genres and effects and taking his six-string to new heights. You could only experience that in a live setting and Lotus captures some incredible moments that were never reproduced again. His sound is very distinct and you know it when you hear it.

Audio Fidelity has been one of the anchor labels for special edition CDs and LP’s for many years now. This is the second run of the Lotus Hybrid SACD, which comes as no surprise. They release great titles with unmatched packaging and sound. As always I suggest getting your copy before they disappear.

Whether you’re a musician, producer, collector or audiophile, there is something here to appreciate for everyone. Lotus is a truly iconic release honored in the most prolific way possible by Audio Fidelity.