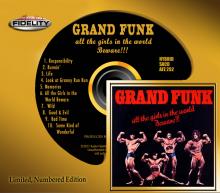 Grand Funk’s All The Girls In The World Beware was a different release for the band. From track to track you didn’t know what to expect. For some fans that never sets that well however I remember loving this album. To listen again as an entirely different person with ears that are paying attention to all the nuances, I quickly realized there was more going on here than I realized.

It takes a process like Audio Fidelity’s Hybrid SACD format to bring out all the details you may have missed the first time around. What I heard besides a good rock album to spin at one of the teenage parties we had back in the day, is a band fully matured and embracing all the elements of rock, pop, funk and blues.

The title track is one funky workout particularly on the bass. Farner cuts loose with some rap like high speed vocals and phrasing to keep up with Mel Schacher’s crazy Jaco like riffs (and I am not saying he was anywhere near Jaco’s expertise, I am pointing out the dominance of the instrument). It is more than that galloping bass in many rock scenarios, it is quite involved. Then you get the less serious band on the spoof “Look At Granny Run Run.” You can tell they were loose and having some fun with that one.

Then it gets more serious with lyrics and music on “Good & Evil.” That track just oozes with emotion like a slow rockin’ blues amped up to the next level. Farner could not only sing but man could he jam on the six-string. The unusual (at his point in their career) marathon ends after nearly 8 minutes of high octane musicianship. Craig Frost’s organ sure added another atmospheric layer to the track as well, it always did but this time it was decidedly more dark and mysterious. This track showed everyone that they were still the great musicians they always were and the pop oriented tunes were for hit radio to keep the label happy. Tracks like “Good & Evil” were for the longtime fans that remember when they were a three-piece banging out songs like “Paranoid” and “Inside Looking Out.”

Of course, “Bad Time” and “Some Kind Of Wonderful” were big hits. Those songs never get old. Again, Mel’s bass totally steals the show on “Some Kind Of Wonderful.”  Mark and Don made a great vocal duo as well and it had quite an impact when they joined forces. Two of the best voices in rock could not be beat.

All The Girls In The World Beware was another good choice to add to the Audio Fidelity archives but my thought is any GF album would be! Great music, sounds, the hooks, and especially all the details, come popping out on this remastered special edition limited numbered release. 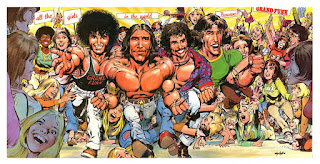