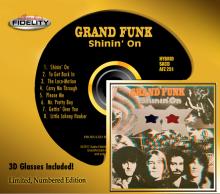 Audio Fidelity continues to be one of the most innovative and fun labels to acquire classic rock music from. Taking the best of the old and converting it to a new format is one of their specialties. The only thing is that you may miss out on their releases unless you act quickly. Each release is a limited numbered edition.

Their legacy continues with another Grand Funk classic titled Shinin’ On. The label’s hybrid SACD series endures with great success. Shinin’ On was originally released on vinyl with 3D glasses to view the ultra-cool cover. This SACD version comes with the 3D glasses included! And yes, I did have the LP version and it was one of my favorite albums. As a matter of fact, I loved the entire GF catalog.

Grand Funk had the advantage of having two lead singers with Mark Farner (guitar) and Don Brewer (drums). Mel Schacher (bass) and Craig Frost (keyboards) were an integral part of the band as well, giving them a layered full sound to accentuate the vocal styles of the two main voices. Frost filled out their sound after the band had performed as a power trio for many years. I appreciated the addition of keys, although I am sure some fans didn’t but that’s the way it goes when changes are made with anything.

This was an excellent album in my estimation. It had the signature Farner guitar licks that at times were cutting like a knife but this was not the heavy Grand Funk Railroad of the past. This version of the band was more modern and pop oriented with less blues influence.  They continued with the same formula that brought them so much success with the previous release We’re An American Band. Also the remake of big hit by Little Eva, “The Loco-Motion,” was proof that the formula could work very successfully for the band.

The entire idea of the SACD is to bring out sounds more to the front so they pop out and grab you. That method has always worked well for these ears. “Carry Me Through” was a good showpiece for that new-found sound. Brewer was on lead vocals and the music was complex and progressive with a multitude of Farner’s stinging leads inviting Brewer’s strong vocals to new heights. Some of the other things I noticed more than ever before were the subtleties of Frost’s keys interlaced throughout the track and his superb command of his instrument. That factor certainly gave the band the proverbial icing on the cake to their presentation. This element prevailed as the band went from strength to strength throughout the recording.

The music on Shinin’ On was radio friendly and it still rocked, offering the best of both worlds and it made for a fine record to spin at parties. I enjoyed it when it first came out and I still do. Now in the SACD format I can appreciate this great album even more.