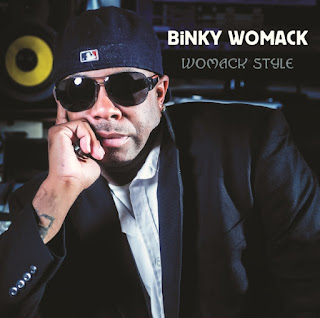 Los Angeles / London - “Womack Style” is the latest album project from Binky Womack, a member of one of the most iconic music families of all time. Nephew of music legend Bobby Womack, Binky's new album is released through Gonzo Multimedia UK.

Binky has his own studio in Burbank, California (The Ear Hole Recording Studio) and acts as a producer to many top line artists. He also has a publishing company, Bindelari Music, which is represented by World Domination Music for the world excluding North America. Bindelari is also the vehicle for new acts such as Jae, as well as Binky's own material.

The majority of the songs on “Womack Style” are originals by Binky Womack and with all instruments being played by him and overall production in his hands, this is truly “Womack Style” music. The musicianship is of the same high quality that we expect from any song/production from the Womacks and Binky's guitar work is outstanding. All tracks are available for licensing, sync and covers. Also, the track “When You're Wrong” is being pushed by Kings of Spins.

Here's a brief synopsis of each track from Binky himself:

1. Sunday Morning - Has the spirit of an old Soul groove like Wilson Pickett Midnight mover  infused with Melodic Rock Guitars licks. With Soulful Vocals crooning to regaining a lost love after an explosive break up

2. Just Enough - Is something for the ladies. Its another great song, a Soulful Ballad. It's the feeling of a Bobby Womack classic as Binky delivers the Womack Style vocal feel. A story that says to the listener being with you is just enough I don't need much more than that.

3. Nobody Loves Me Like You - This is authentic Womack from top to bottom. The delivery, the soul, the harmonized vocals, it's all in there. This is a great tribute to Sam Cooke. the Womack Brothers and all the soulful singers that paved the way.

4. Me And My Guitar - Tells the story of a young Binky Womack living through the separation of his parents and how his Uncle Bobby Womack gave him a guitar to help him cope with the life ahead. Bluesy Soulful celebration of making it with a guitar as a best friend.

5. Malibu Nights - Is a Jazz piece. Skilled Saxophone and Guitar highlight the story of two lovers celebration of beauty and being in love on the Beaches of Malibu California USA

6. Love Addict - Features Snoop Dogg. Uncle B  can be heard crooning nicely in the background vocals. A funky Groove with seductive lead vocals deliver a confession of a lovers addiction for his partner.s body. Snoop Dogg caps it off with a classic 32 bars of west coast greatness

7. Must Be Nice - R&B at it's finest A slow smooth seductive tale of when love works out  right.

8. When You're Wrong - Folk rockish groove Binky Womack & Bobby Womack went into the studio and recorded this future classic piece the original was sang by Bobby Womack and written produced and performed by Binky Womack but we had to go back in and remove Bobby Womack's lead vocal and replace it with Binky Womack due to the confusion concerning the rights to Bobby's vocal performance.

9. Gravity - John Mayer remake, Binky Womack is a huge fan of John Mayer. He writes classic timeless material and he has so many great songs, I had to pick one to redo. I chose Gravity because there is always gonna be some one who's worked so hard risking loosing the things that matter most. The love of a good woman and the struggle to maintain walking in the light and staying out of the darkness that success can bring forth

10. I'm In Love – This song was written by Bobby Womack in the 70's it's been a hit for Wilson Pickett, Aretha Franklin and a hit for Bobby Womack on 2 albums. Binky Womack speeds up the tempo and delivers it to a new generation of first time listeners. This is a destined to top the charts

11. Love Is -  A bluesy Rock n Roll punch to the face. Binky pulls a Prince move playing  drums bass guitars keyboards and covers all the vocals. This song is everything opposite of “Must be nice” - Fast Loud and head banging.

12. Put Something Down On It - Also a single gaining Rock N Roll radio play and Rock video TV exposure, this song bangs heads. Screaming Guitar licks over a solid funk track laid back vocal verses enhance the story line if you want my love Put Something Down on it.

Binky will be involved in the  Memorial Tour for his late uncle, Bobby Womack and his set will include favorites from Bobby's pen as well as new material from Binky.

World Domination Music Ltd is an independent full service music publisher with representation throughout the world. Our roster of writers and catalogue administration deals cover a wide range of styles, genres and languages.

Gonzo Multimedia Ltd is a major independent label and distributor, specialists in progressive rock and pop, psychedelic rock and more, with partners throughout the world. 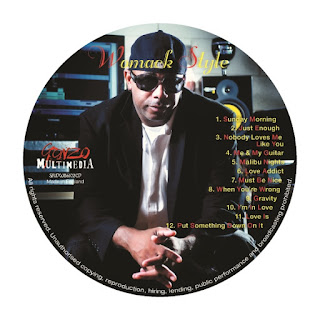