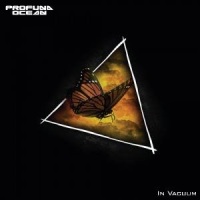 Profuna Ocean is a contemporary prog rock band formed in The Netherlands back in 2008. The debut album, Watching The Closing Sky, was released the following year, and picked up some international attention as well as some Dutch radio play. Indeed, it was one Rick Wakeman, The Caped Crusader himself, who aired Profuna Ocean’s music when he was a broadcaster on Planet Rock Radio. The band then continued to enhance their growing reputation by sharing stages with bands such as Focus, Knight Area and Racoon. 2013 saw the band win the award for “best prog rock band of The Netherlands” for their song, “Waiting For The Fall.”

All the while, the band were working on the second album, refining and evolving their style. They were taking onboard influences from bands like Porcupine Tree and Pineapple Thief in the progressive area of their music but adding the sort of power and intensity a band like Anathema demonstrated, to further hone the newer material in their style.

Profuna Ocean is a 4 piece band comprising Fred den Hartog (drums), Raoul Potters (vocals, guitar), Arjan Visser (bass) and Rene Visser (keyboards) and album No 2, In Vacuum, was released recently. In Vacuum is an 8 track album with a total playing time around 62 minutes, with the title track, “In Vacuum” being the shortest of the eight, running for less than 2 minutes (1:11) and the longest track being “Hanging In The Balance” at over 13 minutes (13:30).

The opening track to any album is important as it has to say “you are really going to like this” and then proceed to grab your ears and provide the evidence for this statement. The spotlight falls on “Thousand Yard Stare” (7:29) at the start of In Vacuum. Starting with crashing power chords, it quickly evolves into gorgeous melodic voices with an acoustic guitar and piano before returning to the power chord sequence with more emphatic vocals. The vocals are terrific and the overall feel of the track is that it neatly straddles the hard, heavy rock and gentle, acoustic, melodic areas. As an opening track, “Thousand Yard Stare” is a definite winner, veering as it does, constantly engaging the listener, plus there are some “killer” electric guitar passages. The track sets the listener up perfectly for the rest of the album.

“Awakening” (4:54) is another track that has a driving feel to it with a heavier sound, but the vocals retain their very melodic flow. This is a shorter track, but has a “hook” from early on which resurfaces several times.

Next up is the longest track, “Hanging In The Balance” (13:30) which allows the band to fly. From the superb guitar, backed by the excellent power unit of bass and drums and the ever present, but only briefly taking the spotlight, sweep of the keyboards, this track simply flows effortlessly, going through seamless changes of tempo and power. “Hanging In The balance” is one of those tracks that you just want to hear over and over again. The long instrumental passages show the amazing tightness of the musicians involved.

The final track, “Clean Slate” (11:42) starts up like a powerful rock track with power chords and great vocals before evolving into an atmospheric piece of music which then morphs into an engine-room showcase (bass and drums) before some superb guitar leads back into the heavier mode. Towards the end of the track, a piano has an excellent passage together with a “whistling wind” and the track fades away.

I feel that the album, In Vacuum, require several listens before you realize that this is a great piece of work. The band has managed to make an album which filters into your head a little more with each play, and then it hits you without warning.

As always, this reviewer’s opinion is a very personal one, but I would encourage you to give Profuna Ocean a listen and I feel that there will be very few disappointed people.