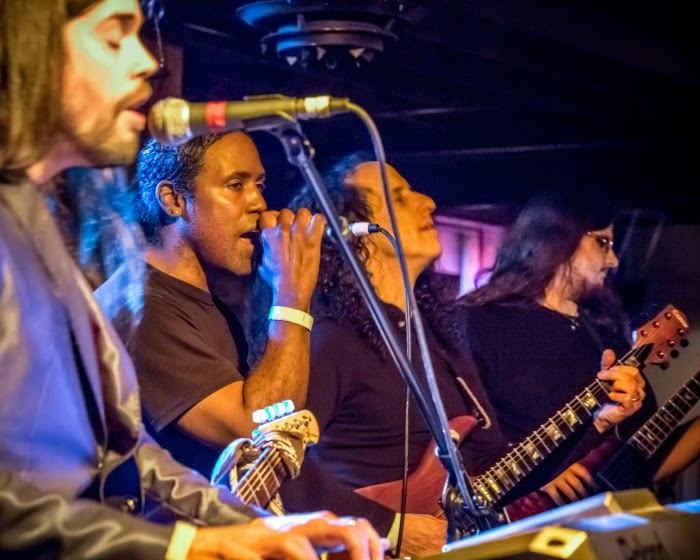 Baltimore, MD - USA based progressive rock and metal band Odin's Court's released their 5th full length album Turtles All the Way Down on March 3, 2015, and it has been well received by the press and fans alike. The album deals with ideas and questions relating to the entire universe and mankind’s place in it, using the idiom “Turtles All the Way Down” to describe the challenge of having to solve a new problem every time an old problem is solved.

Turtles All the Way Down continues to elicit positive buzz from the press:

“The band plays heavy rock inundated with catchy guitar riffs, cool keyboard passages, and excellent lead vocals…the music is so well played, upbeat and catchy as any rock/metal album I have heard in a while. An excellent heavy rock album that should have tremendous crossover.” – Sea of Tranquility

“The strengths are undoubtedly singing, orchestration, and the work on the guitars. Here is an album for all progressive metal fans and all fans of metal and progressive music. It is highly recommended listening!” – MusicInBelgium.net

Check out the newest video single from the album “And the Answer Is…” here:

“And the Answer Is…” deals with an individual’s attempt at coping and trying to understand mankind’s origins and beyond.

Band leader Matt Brookins comments: “The latest single ‘And the Answer Is…’ deals with the internal thought process people go through as they try to figure out their place in the universe. Attempts at handling the vast scope are a big part of this, because infinity is a concept the human mind has a hard time grasping. Sometimes we think we have things figured out, then we dig deeper and our thought process spirals out of control leaving us as confused as ever. In my specific case, I remember a ‘lazy Sunday’ as a teenager laying on the floor in the sunshine. I fell asleep, but it was that special kind of ‘asleep while awake’ state, where you are conscious and controlling your thoughts…trying to maintain the balance of being aware so you don’t wake yourself up, but also continuing to crunch data in that serene state. I remember thinking ‘that’s it! I’ve figured it out!” only to wake up, and promptly lose everything. I was aware enough while asleep to remember, when I woke, that I was thinking about the meaning of it all and had figured it out – but somewhere between the lucidity of dreaming and waking, I lost the actual answer.”

Odin's Court is a Maryland, USA based Metal and Rock band that was formed by Matt Brookins in 2001. The band was signed to ProgRock Records in 2008 releasing 4 albums worldwide. They released their latest album Turtles All the Way Down independently in 2015 through their own label D2C Studios. The current line up started gigging in 2013, and has the following live dates confirmed thus far for 2015:

More press highlights for Turtles All the Way Down:

“Some great songs with great passion and melody, expressive vocals, intense use of keyboards, and precise guitar work combined with progressive drumming. Moods are created and then create an atmosphere ... at certain points you get goosebumps. This is a band that definitely gets far too little attention in the global scene.” – Heavy-Metal.de

“With pipes in the Jon Anderson’s range (Dimetrius LaFavors), and progressive rock music with a semi-metallic shine, Odin’s Court is a worthy listen — and with more listening, the band tends to grow on you.” – Goldmine Magazine

“The very first impressions make it clear that the band has stayed true to itself while still delivering detail-loving, sensitive, emotional art that ensnares the listener with beautiful hooks.” – PowerMetal.de

“The twin guitar work, which sees Brookins team up with Rick Pierpont is a real feature, and this is an album that prog fans should be hunting down.” – The-Rocker.co.uk

“The album is far from derivative, it’s fresh and varied enough to hold your attention, the production is faultless, composition is well thought out, and everything sits exactly where it should, there’s nothing jarring or out of place.” – Amplified Newsletter

“Odin’s Court actually creates a very pleasant racket, where the music is rooted in progressive metal but which borrows liberally from the power metal and melodic hard rock genres. It is an enjoyable listen if not an entirely essential addition to your collection.” – Powerplay Magazine

“The highlight of the album is the lead playing of Matt Brookins and Rick Pierpont, of which there is plenty. Both in the breaks in songs, and the several instrumentals, they take turns playing richly melodic solos.” – Bloody Good Horror

“Turtles All The Way Down" is an excellent polished heavy rock album that should have tremendous crossover appeal for fans outside the prog genre while still retaining a complexity and high level of musicianship that fans of melodic progressive rock are searching for.  Odin's Court is a great band, I mean great, believe me.  So this is Highly Recommended for all metal-related fans, including progsters, hard rockers and even lovers of the harder side of AOR.” – 0DayRox

“Odin's Court excels in two areas beyond the average: a singer who perfectly embodies the ideal of progressive singer and a guitarist who has a melodic taste out of the ordinary: Dimetrius LaFavors, and the all-rounder Matt Brookins.” – HardSounds.it

“The guys have made the record of their lives.” ProgWereld.com

“The album sits at the more melodic and accessible end of the Prog Metal Spectrum. For those who like their Rock a bit more technical, there’s enough on offer to show these guys know how to play, yet the album seems to constantly on the build to the epic seventeen minute closer.” – Fireworks Magazine

“A truly impressive effort, with solid songwriting and outstanding musicianship. Terrific melodic prog/metal that gets better with every listen!” – USA Progressive Music

“4.5 out of 5: Turtles All the Way Down is an exceptional album of classic melodic progressive rock and metal…Easily recommended.” – Danger Dog

“Odin's Court mixes metal and hard rock to a tasty menu that you can enjoy anytime.” – Proggies.ch

Here is what some Odin’s Court fans have been saying about the new album:

“The latest release touches taste buds of a well-seasoned palette in all the right ways. Great songs, great lyrics, great performances. Delicious. Judge for yourself and give this band a try. Support the Arts!” – Facebook User

“It is most definitely the best Odin's Court has sounded to date. The compositions, the execution, the production, the mix - all great. And the geek element. Cannot forget the geek element.” – Amazon Customer Review

“What the hell are the folks up in the DC area eating and drinking? The A Sound of Thunder and Iris Divine projects and now this? Whatever it is, I'll have seconds. Just another quality result here.” – Ultimate Metal Forums