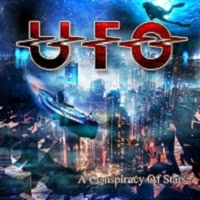 There is something to be said about longevity, the ability to last and endure despite all that life throws at you.  And enduring is just what UFO has been doing for decades, which is even more impressive as a band, because audiences are fickle and music fads and trends come and go, but the real artists remain.
Formed just as the 1960s were ending, Phil Mogg, Pete Way, Mick Bolton, and Andy Parker made-up the original line-up. They put out two albums before Bolton left and was eventually replaced by Scorpion’s Michael Schenker, which began their successful 70s years.  Like many rock bands of that era, UFO has experienced many personnel changes with Phil Mogg (vocals), Vinnie Moore (lead guitar), Paul Raymond (keyboards, rhythm guitar), Rob De Luca (bass), and Andy Parker (drums) being the most recent incarnation.  A Conspiracy of Stars is UFO’s twentieth album and is it full of guitar-driven hard rock goodness.

“The Killing Kind” gets things going with a nice guitar riff and some pulsating drums.  It is a good song to start the album and is a nice indication of what is to come with some gorgeous sounding guitar action that can be found all over the album.  They turn it up on “Run Boy Run.”  The song has some real attitude, coming out heavy and hard.  It is one of the more memorable songs on the album.  The guitar is all over this one and tears it up near the end.  With great hooks and a cool western feel to it, “Ballad of the Left Hand Gun” is a very dynamic song that rocks hard and does a good job of heating things up.
Switching things up is “Sugar Cane.” The tempo comes down, the sound has a bluesy ring to it, but things stay as heavy as ever.  The guitar solo in the second part of the song is amazing and really sticks in the mind.  It definitely is the main factor for me in coming back to this song again and again, because it is such a great part.  “Devil’s in the Details” keeps things hard and heavy and sports a pretty sweet groove as well.  The power ballad, “Precious Cargo,” follows it up nicely.
As the album nears the end, “The Real Deal” and “One and Only” are two quality rock songs that keep things hot and jumping.  “Messiah of Love” brings back the heavy sound and it is gorgeous. Everything is on point here, the vocals, the guitars, and the drums are all tight and in perfect form. I would not be surprised if this becomes an album favorite for many fans.  “Rollin’ and Rollin’” is a strong closer that is pure hard rock brilliance.  The guitars that tear it up near the end are just the icing on the cake.   The limited edition bonus track, “King of the Hill,” is thrilling with its rip-roaring opening and cool riff that rolls right along through the song.
UFO’s A Conspiracy of Stars proves that you are never too old to rock out.  Through all the years and line-up changes, UFO still has the juice to put forth a very solid effort.  This is definitely the type of album that longtime fans of the band and hard rock fans can get behind.  There are plenty of meat and potatoes here with very little fluff.
4.5/5 Stars