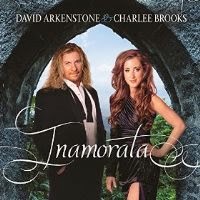 Some performers stick in your heart long after the last note is played. David Arkenstone and Charlee Brooks are two of those. After their last album, Lovéren, I fell in adoration and was thrilled to find out about Inamorata. David Davidson performs the violin and his contributions as always are beautiful. The release in February 2015 couldn’t have been timelier. Just in time for Valentine’s Day, this album is a spell of love and longing with eight original tracks along with renditions of the Game of Thrones main theme as well as, “Did I Make the Most of Loving You” from Downton Abbey, Zedd’s “Clarity” and “Harem” from Sarah Brightman. The last song on the album is dedicated to Arkenstone’s niece who was born during the recording of the album.

The second song on the album is the theme from Downton Abbey. “Did I Make the Most of Loving You” is presented flawlessly with orchestral quality sound and Charlee’s gossamer vocals. Radiant and vibrant with percussive elements that inspire imagination, the piece is magnificent.

“Inamorata” is the title track for the album. A ballad of love and hope, this song is the light in the window of the soul. This is an original work and personifies a love that lasts forever. It leads into the “Main Theme” from Game of Thrones. I found it fitting that they were next to each other on the track lineup. With the Celtic strains and magical imagery invoked, this piece brings to life a world of adventure just in time for a new season to arrive on DVD. Every fan of the show will love this rendition. Clear and melodic with harmonies that reach up and grab you, this piece will make your blood pound and your fingers itch to grab the remote to watch more of this epic series.
“Clarity” is filled with breathy wisps in the background, piano and multi-instrumentation. Charlee’s sparkling vocals echo in the heart. We don’t always want to fall in love but sometimes the very person we fight against is the one who will be our salvation. Poignant and full of emotion, this piece will warm the heart of romance readers everywhere. It reads (sounds) like a romance novel and that makes this one of my favorite songs on the album. Love. Angst. Love. Can’t get much better than that.

David Arkenstone has been making music for twenty five years and is a performer that gives nothing less than perfection. The love and care he put into this album is truly beyond the pale and he surrounds himself with artists that give only their best. Love songs are always well met and this album takes eight original pieces along with four favorites and weaves a fairy tale mix of epic proportions that will hook you in the first few minutes of listening.

Key Tracks: Believe, Inamorata, Did I Make the Most of Loving You, Game of Thrones, Clarity