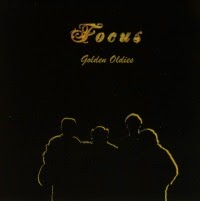 Focus, the band, was originally formed in 1969 then split up in 1978 and reformed in the early 2000’s, recording and touring since then. The latest line-up has been together since 2011, although Focus aficionados will wax lyrical about which version of the band they feel was the best. Consequently with the “new” Focus, it would seem better to, wait for it, “focus” on the new material being issued. I was suitably impressed with X when I reviewed it in 2013. Here was a band that sounded as if they meant business, taking the Focus legacy and pushing the boundaries just a little bit. Now I am presented with the latest release from the band titled Golden Oldies, and I think the title tells us all we need to know about the contents.

The current band has four members and they are, Thijs Van Leer (Hammond organ, flute, vocoder, vocals), Pierre Van Der Linden (drums), Bobby Jacobs (bass) and Menno Gootjes (guitars). Thijs was the founder of the band in 1969 and Pierre was only a year later in joining the band, although he has left and rejoined a couple of times, Bobby became a member when the band reformed in 2002 and Menno is the “youngest” band member having joined in 2011.
Thijs Van Leer has explained the reasoning for this release with the quote, “Producing Golden Oldies was tricky with both diehard fans and 2014 Focus members having doubts about the enterprise. We didn’t know if the recent record would match the original material. We had so much fun doing the session, quick, romantic, virtuoso, full of funny moments and profoundness. The final mix turned out to be fantastic.”  With that in mind, how does this reviewer feel that a rerecorded oldies album goes down?
Golden Oldies is a 9 track album with a running time of around 50 minutes. The longest track on the album is “Focus 3 and 2” which runs on for 7:35 minutes and “House of the King” is the shortest at 3:20 minutes. All tracks are re-workings of earlier material, with 7 taken from 1978 or earlier and the other 2 are recordings by the reformed band from 2002 onwards.
First up is “Hocus Pocus” (6:51) and to be honest, what else would you start a Golden Oldiesalbum with?  The start is excellent and immediately takes you back in time. Always a blast from start to finish, this is a magnificent piece of music and the bands’ reworking doesn’t shift far from the original, with the Thijs Van Leer vocal sounding a little strained at points, but he is a bit older. There are a little more shrieks at times, but the long drawn out ending doesn’t add anything to the original.
“Tommy” (4:16) is a lesser known Focus track, coming as it does from the long suite on Moving Waves (1971) entitled “Eruption” and it is a typically soaring guitar instrumental. This leads on to one of the earliest Focus tracks, “House of the King” (3:20) with its acoustic guitar intro and that very “Jethro Tull” sounding flute passages which simply motor along.
There are two of the self-titled tracks on show, “Focus 1” (6:58) and Focus 3 and 2 (7:35), the former includes a vocal, very gruff and gritty, and the latter is a terrific instrumental, both encompassing the same theme which appears in different guises across all Focus releases.
While the tracks thus far have not strayed much, if at all, from the originals, “Sylvia” (5:29) is very different. It is initially unrecognizable as “Sylvia” with a changed start and then after 1:30 minutes the original theme puts in an appearance. The track is also 2 minutes longer in length with the band getting a workout on this cover. There are some piano “fills” thrown in from time to time and at around 4:20 minutes, the track takes on another slice of life with a new passage which then seamlessly slips back into the original music again.
“Brother” (6:30) I have always found a bit of an odd song in that the instrumental passages are superb, but the vocals seem to pull the song down and the same happens here.
The final two tracks are from the bands newer reincarnation and “Aye Yippee Hippie Yee” (5:30) is an attempt to recreate the magnificent “Hocus Pocus,” and was not the only attempt to do so by the band, as “Neurotika” (3:40) also shows very clearly.
I was actually pleasantly surprised that I enjoyed much of Golden Oldies, considering the feeling of trepidation I had prior to hitting the play button. Most of my enjoyment was generated by the longevity of the Focus music, but I am still at a bit of a loss to understand why this album has been issued. For the most part, the music on offer varies little from the original recordings and while I could see some value in releasing a “live” greatest hits recording with the “new” band, I just don’t get this release at all.
The target audience for Golden Oldies may well be those attending current Focus concerts and then looking to purchase an album, although I don’t think that Golden Oldies will be an essential purchase for diehard Focus followers. Despite my enjoyment at hearing the oldies again, I think that this release is, if not a backward step, then at least it is a “running to get nowhere” release, especially after the promise shown by the X album released last year.
3.5/5 Stars
Key Tracks: Focus 1, Sylvia, Focus 3 and 2