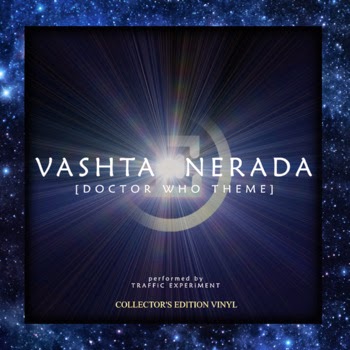 Traffic Experiment is a prog rock/art rock band hailing from the UK. We covered the special edition of their Suburbia album last December.After nearly wearing out that album I could not wait to hear Vashta Nerada (Doctor Who Theme) on vinyl. It does not disappoint.
To celebrate the 50th Anniversary of the airing for the popular TV series Doctor Who, the band decided to release their own rendition of the show’s theme with a limited edition 10” vinyl release of 500 copies.
Side A is a stunning instrumental journey titled “Vashta Nerada (Doctor Who Theme),” clocking in at a solid 6:32. Stuart Chalmers, the band’s leader, made sure I got a copy to add to my collection and I thank him for that. Their version features tremendously effective instrumentation that includes a walking bass, layered keyboards interspersed with some beautiful female accompaniment on vocals. The vocals are not a group of words per say just a steady ahhh..ahhh at different points during the track. The effect is like adding another instrument to the mix and it works very well. The B side is a previously unreleased track titled “New Moon Lullaby (things that go bump in the night)” which clocks in at 7:26. Chalmers handles the vocal duties and the music weaves threads of atmospheres that are appropriate for the title. This is a lullaby with a sinister edge to it. This is not to say it’s a creepy tune, it’s actually quite good and it gets the point across, conjuring different images for those with an active imagination.
Traffic Experiment is a very talented group of musicians and they know how to shape and mold a song into a story. 500 copies makes it a rarity right out the gate so I suggest you get your copy, that is if there are left at this point!

Side A: Vashta Nerada (Doctor Who Theme)
Side B: New Moon Lullaby (things that go bump in the night)