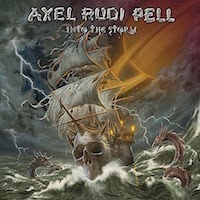 Artist: Axel Rudi Pell
Title: Into The Storm
Genre: Metal
Release Date: January 21, 2014
Label: Steamhammer/SPV
Website: http://www.axel-rudi-pell.de
Axel Rudi Pell is a guitar legend. The German heavy metal star’s next record, Into The Storm, will be the sixteenth of his long and successful career.
The new album brings a change to Axel Rudi Pell’s backing band, the first since Johnny Gioelle (lead vocals) and Volker Krawczak (bass guitar) joined the group in 1997.  The change sees drummer of fifteen years Mike Terrana being replaced by Bobby Rondinelli. Fans need not worry about Rondinelli’s ability to fill Terrana’s shoes; over the years he’s played with the likes of Blue Oyster Cult, Black Sabbath, Quiet Riot and Rainbow.
Into The Storm offers everything that people have come to expect from Axel Rudi Pell. Powerful, melodic vocals, pounding drums, solid bass lines and, of course, exceptional guitar playing.
Rudi Pell’s playing on the new record really is fantastic. His signature, crunching guitar sound is on display through the album and is put to great use as Axel Rudi blasts out killer riffs on tracks like “Long Way To Go” and “Into The Storm”.
Another track worthy of a mention is the cover of Neil Young’s “Hey Hey, My My.” Alex Rudi Pell have taken a classic, iconic track and completely made it their own. It takes guts to cover such famous, well-loved song and it takes a lot of skill to pull it off in the way that Alex Rudi Pell has.
Into The Storm may not be the most groundbreaking or original album that you hear in 2014 but if you’re a fan of Axel Rudi Pell then I think it’s safe to say that you’re going to love it.
4/5 Stars
Key Tracks: Hey Hey, My My, Long Way To Go, Into The Storm
James Hinton
January 7, 2014
Posted by Keith "MuzikMan" Hannaleck at 1/07/2014