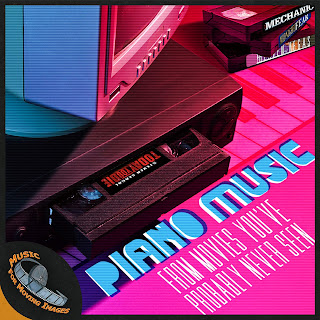 Stephen Edwards is renowned for his soundtrack film and television work. His compositions can be heard on television series such as Two and a Half Men, It’s Always Sunny in Philadelphia, Mad Men, The Blacklist, ER, Transparent, and over 50 other series. That is just a sample of his reach into the world of music and multimedia entertainment.

With the release of Piano Music-From Movies You've Probably Never Seen, you will hear 19 tracks of eclectic solo piano music. The most interesting fact with this release of course, is the title. For most fans of all-around entertainment, it is certain to arouse your curiosity in a variety of ways. If you are so inclined, you can open the CD booklet and take a look at each track and its origins. This is a very helpful guide and a quintessential completion piece to this group of tracks.

Most all of the tracks you can dub as singles or made for a spin on a 45 (7” vinyl) as we would say back in 60s and 70s. This of course reaches back the vinyl days of singles. You will hear so many things with this music that includes elegance, beauty, pensiveness, anticipation, haunting, echoing, spacey, happy, sad, energetic, and more. The delicate playing can be very soft and it forces you to listen closely and imagine a scene in the movie his paying tribute to. Other tracks are more robust and higher in volume.

It all has to be visionary if its short instrumentals, even more so because of the length of the tracks. Stephen is triumphant at every turn, convincing his audience that there is indeed a movie playing and it is entirely up to each listener to become part of the scenery or absorb the audio delights for the sheer joy and relaxation of it.

When the disc stops spinning it clocks in just under 50 minutes. It may seem like the fastest 50 minutes you may experience and the reason for that is one, the songs are short lived, and secondly, each one stands alone as a separate piece of art performed with a different twist than the last one you heard. They are all meant to be a tribute to specific film (see the track list).

After listening to Piano Music-From Movies You've Probably Never Seen, it was obvious why this talented gentleman has been so successful and in demand. So, to all of the instrumental music lovers out there, set your expectations high because you will not be disappointed.