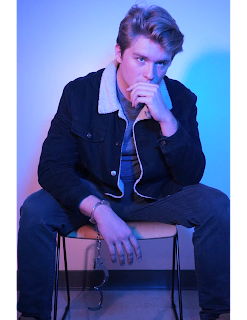 Writing songs since the age of 13, Lucas Harmon is a songwriter on a mission to change the industry forever. The most important thing to Lucas is the raw and genuine emotion conveyed through his songs, striving to relate to his listeners on a personal level. Lucas holds himself to the idea that every lyric written must have a deeper meaning to him and never decides to write in a lyric simply because it sounds good. Back with an exceptional new release ‘Breakaway’, the track covers themes of anger, redemption but most of all, empowerment. Produced by Grammy-nominated Shane Adams, ‘Breakaway’ was recorded at the studio ‘House of David’ located in Nashville, TN.

Speaking about the new release, Lucas shares, “I wrote Breakaway about 2 different people I was involved in romantic relationships with. These were not healthy relationships, these two people were very manipulative and did not treat me well. When I was in these relationships it was like the wool was pulled over my eyes though, I would keep coming up with excuses on why I was in the wrong in certain situations, when in reality and with time I soon realised I was not and was completely valid in my emotions.

Breakaway is a song I wrote when I was finally able to think clearly about these 2 people and finally get my own perspective when it wasn’t being skewed. In a comedic sense I guess you could refer to this song as a “roast” in a way. I tried to put everything I was feeling out in an aggressive a straight forward manner. I held nothing back and tried to explain my thought process without being afraid to speak up. I’m telling myself to breakaway from my habits of getting involved with people that don’t treat me right, while hopefully encouraging others to do the same.”

Striving to always be honest with his music in order to convey his authentic self, ‘Breakaway’ comes across as relatable and a strong contender in the world of indie rock.