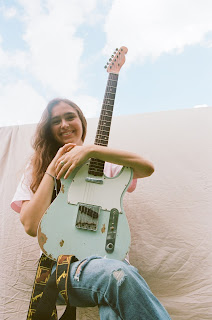 Armed with a message that hardship and heartbreak can build character and strength, Lily Kaplan is the inspiring artist you need in your life right now. Written after going through heartache, ‘Just Friends’ hears Lily process those emotions and clearly states she uses music as a form of escapism. Heavily influenced by a diverse range of artists from Radiohead, Otis Redding to Eloise and Melanie Faye, Lily’s music is hard to pin point to one specific style.

Adding to the track’s effect on her, Lily shares, “I feel very at ease when I hear it as I was finally able to let go of this person and finally begin to move on. It was almost like a final goodbye to this person and closure for myself. I was in lust with someone for over a year and a half. It was really really unhealthy and stunted a lot of my growth.

I thought for so long that this person was everything that id ever wanted and that I loved them, but being in love with the right person now has shown me that it really wasn’t even that. I was longing for comfort and security and thought that I could find it in them. It was really back and forth for so long and honestly just torturous. The song literally took ten minutes to write. It was almost waiting to be released.”

Musically captivating from the first note, ‘Just Friends’ was produced by Sammy Gonzalez and further mastered by Ryan Haft. A relatable indie-pop single that comes in a time of need for the heartbroken across the globe, Lily’s comforting vocals speak volumes that we all can familiarise ourselves with. A track that sits happily on repeat, ‘Just Friends’ dives into realms of indie but nudges a polished pop production that could leave it debuting at the top of the charts.

Speaking about creating the track, Lily adds, “This time I knew exactly what I was trying to achieve in the studio. I had a great time building this song and watching it develop. I knew it was going to be something special the second I wrote it, but never knew it could turn out like this. For the first time in a long time, I am happy with one of my songs. It was a super intimate recording process. I was there when all the instruments were being recorded, and the order in which we recorded them was perfect. I started with guitar and vocals, and slowly watched the song blossom.”