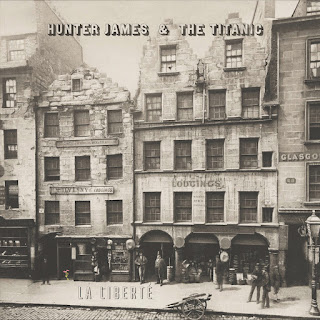 Receiving previous support from the likes of 303 Magazine and Westword, this roots-rock outfit are certainly turning heads with their uplifting sound. Led by lead vocalist, songwriter and guitarist Hunter James, the group formed in 2018 and are back with their sophomore album “La Liberte”. Consisting of sometimes as many as  nine-members (see below to find the full band line-up), you’ll find the band reflecting on the memory of young love lost with a crying hope for redemption. Summarising the album;, Hunter James shares, “La Liberte is about finding joy and meaning amongst the trudge of everyday existence”.

As alternative rockers, Hunter James & the Titanic gear up for their sophomore release, lead single “Over the Line” is the quintessential Americana rock n' roll anthem. With a pulsating beat throughout, powerful lyrics, along with a verse, chorus and outro worthy of any great modern rock band, the track is an energy-filled foot stomper. La Liberte'; is an album that harkens back to the feeling of driving down the highway in your parent's wood-trimmed station wagon before you ever got your driver’s license and “Over the Line”, the first real rocker on the album, captures the essence of a freewheeling existence, gaining momentum with every Chorus and overdriven slide guitar riff. Composed of 12-tracks weaving through multiple sonic textures, ‘La Liberte’ radiates love and reflection - something the world certainly needs more of at the moment.