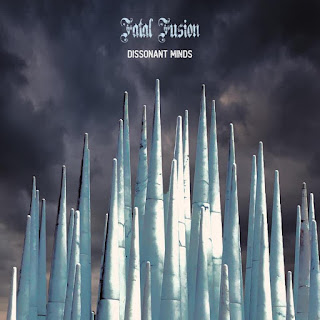 I have been a follower of the band, Fatal Fusion since I heard a track from an early album. Fatal Fusion was formed in Oslo, Norway in 2008, and utilize classic instruments, vintage synthesizers, mellotron, and Hammond organ as they pay homage to the 70’s prog bands, but they have their sound.

That sound has been described as a blending of different genres such as rock, classical, metal, blues, jazz, and even psychedelia and Latin. The band has released four albums, from the debut, Land Of The Sun (2010), through The Ancient Tale (2013), and Total Absence (2016) and onto the album being reviewed, Dissonant Minds (2020).

Fatal Fusion has had a settled line-up since its inception in 2008 and the 5 members appear on all albums; Knut Erik Grontvedt (vocals), Stig Selnes (guitar), Erlend Engebretsen (keyboards), Lasse Lie (bass) and Audun Engebretsen (drums, percussion).

The opening track, “Coming Forth By Day” (14:22), is straight to work almost immediately with the band into full flow with 2 distinct passages, the sound building up, dropping away and then this flow repeating, so when the 3-minute mark is reached, the sudden arrival of an acoustic Spanish style guitar passage is a great surprise. The electric guitar puts in an appearance, now and again, before the acoustic passage is joined by a flute, which heralds the entrance of the instantly recognizable vocals of Knut Erik Grontvedt. Initially, there follows a very gentle passage before the vocals harden, and the band starts to rock, changing the style, before a switch back into the gentle, almost meandering passage, which then repeats ensuring the listener is kept on their toes (aurally speaking). Around the 7:10 minute mark, the electric guitar of Stig gets the opportunity to shine and he carries the track until the vocals return around 9:00 minutes. By 9:30 minutes, the pace has changed again and the band is in full flow with the keyboards of Erland getting the chance to come to the forefront. A more choral style keyboard passage appears around 11:20 minutes and the vocals return, as does the electric guitar of Stig and the band start to drive towards the finish. However, at 14:00 minutes, the band leaves the finale to the vocals of Knut Erilk and the superb piano of Erland.

I feel that the opening track to any album requires to be one that will grab the listener and “Coming Forth By Day” does just that. The listener is taken on a journey from the soothing and gentle to the harder and rockier areas which leave the listener looking forward to the rest of the album.

The final track, “Broken Man Pt 2” (17:22), is the second epic-length piece of music on the album and it has taken from the debut album in 2010 to come up with Part 2 of “Broken Man” which graced that earlier album. The opening of “Broken Man Pt 2” starts in a relatively gentle style with the band working as a tight unit with bass (Lasse Lie) and drums (Auden Engebretsen) setting down the solid foundations of the track. By the 6th minute, the style changes with keyboard swathes and an insistent drive from the powerhouse, the bass, and drums, behind Knut Erik’s vocals. The keyboards and that driving beat then switch with the entry of Stig’s electric guitar around the 9:00 minute mark. The track continues to drive along with the keyboards to the forefront and similar to track one, the listener is frequently teased with “retro snippets” which hark back to time away in the past, but no sooner have they appeared then they are gone. Around 11:45 minutes, everything drops away leaving the solitary piano playing a plaintive theme, which heralds the appearance of the vocals again, which are similarly plaintive, before the band are off and running, if not quite as fast as earlier, before again taking a backseat as the vocals come to the fore. The band again gets to flex their collective muscles with a keyboard-driven passage taking the track onto 15:30 minutes. Stunning guitar work just after 16 minutes heralds the impending end of the track, with the sound building to a crescendo and then simply vanishing.

A terrific final track, with the regular movement from the gentle to the more aggressive style, gives the track an edginess and the stunning solo passages, both from guitar and keyboards, completing the superb ending to Dissonant Minds.

Fatal Fusion has continued to build from the foundations set down in 2010, and Dissonant Minds is the culmination, thus far, of the evolution of the band. If you like your prog rock to sound fresh, but still give a nod of the head to the prog scene from the ’70s, welcome to the sound of Fatal Fusion. This is an album that should find its way onto many listeners CD shelves or storage areas, so give it a good listen and if this is the first Fatal Fusion release you have heard, be prepared to dig deep to collect the earlier albums.