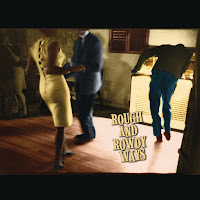 On Rough and Rowdy Ways, his first release of original songs since 2012, Bob Dylan dishes on a wide range of topics from mortality, history, and inspiration to pop culture. He speaks more so than sings through a scratchy voice that bristles and pops like a dusty record spouting socio-political ruminations on a world that's not dark yet but getting there.

The bottom line is that Dylan's lyrics overtake this collection. The crafty chord shifts, wailing harmonica, and rock rhythms, which defined the folk-rock sound in the '60s and '70s, are nowhere to be found. His soliloquies are, at times, poignant and prescient. Other times they are self-indulgent and self-aggrandizing, making the overall listening experience confoundingly hollow.

If we focus on the more poignant lyrics, there is a lot to like. Dylan's masterfully infuses metaphor and weaves in pop references to create something of a hip hidden history lesson for the uninitiated. "Murder Most Foul" is by far the most potent track lyrically. Dylan skillfully uses the JFK assassination as a baseline from which to ruminate poetically on the thousand historical reverberations rippling from the impact of that fateful day.

Still, I had a hard time picturing anything but Dylan on stage at a poetry reading with a bass player and a drummer in the corner laying down jazzy syncopations while Bob reads from a notebook of poems. Couplets that struck me most forcefully include:

Crossing the Rubicon: "I feel the holy spirit inside, see the light that freedom gives. I believe it's in the reach of every man who lives."

Murder Most Foul: "The day they killed him, someone said to me, "Son. The age of the Antichrist has just only begun."

Overall, words alone are not enough to hold Rough and Rowdy Ways together, there is no sonic earth for these verses of truth to take root. Guitar & Pen gives out no free passes, as some other magazines do. While we kneel at the feet of the Gods, we won't always kiss the ring. If only old Bob had brought in Mark Knopfler to play some backing guitar, or Jacques Levy on electric violin or Daniel Lanois to produce, this would be a record for the ages. As is, I consider it more of an audiobook than a record album. While the lyrics shine, the band's restraint makes this a largely forgettable release.