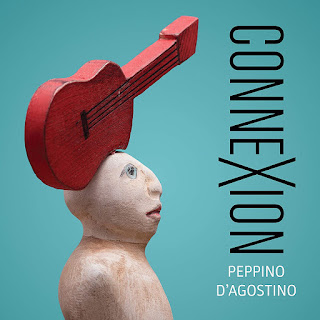 Peppino D’Agostino, an Italian-born guitarist, with more than 40 years under his belt. Having left Italy, more than 30 years ago, he has revolutionized the works of the guitar. He mastered the technique of fingerpicking and as such has been labeled, “a giant of the acoustic guitar.” With no sign of slowing down, having toured over 30 countries so far, and each work D’Agostino releases being an upgrade from the last; this guitar-guru-turned-instructor can do almost anything when it comes to music. Connexion is his most recent release.

As though you are walking through villas of Italy themselves, Connexion wakes up with a smooth, sultry sound that gently caresses the listener’s ear bringing them to a place of pure happiness and is sure to place a smile upon their face. The incremental triple or quadruple strumming sets offer hints of excitement on the opening track “High Plains Guitarra.” The constant back and forth. Between tremendous eventful highs and build-ups, and few but sudden, melodic and mellow lows, the artist entices the listener for what’s to come.

Coming off the highs of “High Plains Guitarra,” “Dancing with Shadows” is perfect somber ear-play to trick the listener not to expect the same result from every track. With the very short, but playful back-and-forth of the song, it is a relaxing piece that makes D’Agostino look like he was trying to weave a musical web.”Head Case,” with its more staccato-like structure is a fun, quick piece in which the artist plays with the listener. “Buster” is more complex. The song is layered in such a way that it has hints of a dark brooding sound while trying to come to a struggling resolution.

“Mara’s Sleeping Song,”  (if not for the title alone), is a lullaby that makes peace with the listener. Amid the song, the guitar transforms somewhat into a heightened cry for peace as the musician climbs a white, cloud-covered staircase. “Mexican Sunrises,” continue that calm and serene sounding tone. D’Agostino is capable, in a way, to cause the mind to drift off into such a place. “Liam’s Song” is hard to describe. It starts off very melodramatic and mysterious, and yet by the end, it is finishing off at a rushed, stimulating tempo, only to fall back to an eery ending.

“Stammi Vicino” translates to “Stay Close to Me.” It plays a love song that only wishes to keep on playing into eternity. The song plays like a longing calling card for one’s partner to remain side by side, to complete all of the goodness within his or her life (depending on if this is personal to the musician himself or written from a friend or onlooker’s perspective). “Jenny’s Goodbyes” with its carrying constant one-note undertone, offers a simple yet appealing lead-up to the final number. With only a minute and a quarter, the final track “Beauty in the Abyss” is an alluring ending to an album that offers up so many twists and turns with only a guitar at the helm.

Who could’ve guessed an acoustic guitar could wield so much power. Well, Peppino D’Agostino captivates emotion to its core, exploring all avenues of depth and rhythm within the confines of possibly an amp or not and just one sole instrument. When you combine Connexion with his masterful, musical history, Peppino D’Agostino is hard to overlook.