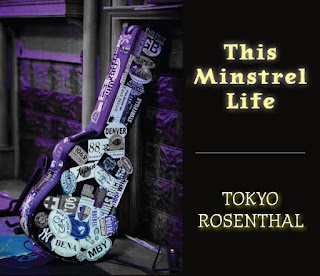 The CD contains six original studio recordings and four live recordings from various locations with an assortment of accompanists. This follows the theme of the new record which is about the lives of touring musicians, today and yesterday. The new recordings include the politically driven single, "Now I Believe There's A Devil" and an updated version of the previously released, "The Immigrant", now entitled "The Immigrant Revisited". In light of the present climate regarding immigration, Tokyo wanted to revisit this subject.

"This is a very different album for me and I'm excited by this project", said Rosenthal. "I like being able to present what I sound like on tour with a group of different touring partners from over the years. As always, the studio experience was great and enhanced by the magnificent musicians who joined me in Chris Stamey's facility. Navigating the music business these days is very difficult and I feel we've come full circle from the original days of traveling minstrels. I see myself, and my colleagues, mirroring the way things were back in the 1800's. In other words, we go from gig to gig, often getting room and board, selling our wares, and of course performing our original tunes. Today we travel by car, back then by horse. I believe the new songs are complimented by the live tracks as they expand on the 'Minstrel' theme."

Rosenthal intends to begin touring in the fall in and around his Chapel Hill home area and the Southeast US. Then early next year he will begin visiting the Midwest, the Northeast, The UK, Ireland, and other locales.

The video of Toke's single, "Now I Believe There's A Devil", spells out the lyrics from this dramatic indictment of the present administration. The video can be viewed on You Tube at: