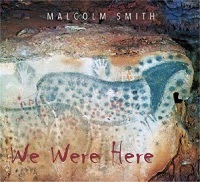 This review deals with one of the artists I have been unaware of thus far, one Malcolm Smith, who I discovered is the guitarist and founder of the American symphonic prog band, Metaphor. This is his first solo album produced while Metaphor were undergoing a hiatus and is entitled We Were Here.

As with many solo albums, there are guest musicians aplenty helping out on tracks. The musicians involved in We Were Here are, Malcolm Smith (electric/acoustic guitars), Mattias Olsson (drums), Marc Spooner (keyboards), Loren Gustafson (bass), John Mabry (vocals) with Rich Longacre and Craig Launer guesting guitarists on 2 tracks. Marc and John are members of Metaphor, and Mattias is associated with Anglagard, White Willow and NecroMonkey.

We Were Here is a 6 track album, lasting around 48 minutes, with only one track featuring “real” vocals. The longest track offered up is track 5, “Sykiatry” made up of 9 parts and running on for 13:31 minutes. At the other end of the scale, the shortest song, “Peyronie’s Angle” still stretches out to just under 6 minutes (5:58).

The opening track to We Were Here is the shortest on offer, “Peronie’s Angle” (5:58) and has a gentle keyboard opening before an excellent guitar passage fires up, and what sounds very much like a trumpet, but this is not an instrument that is listed, so my thought is that it is keyboard generated. The keyboards get free rein to produce a superb passage with lots of little hooks and riffs that constantly engage the listener. This track motors along and is an excellent vehicle for the skills of Marc Spooner on keyboards. Excellent guitar work takes over around the 4:50 minute mark and takes the track out with a burst of (keyboard generated) “strings.”

“Cavity Research” (6:18) has a very jazzy influenced start, again highlighting the keyboards of Marc. This track builds up layers of sound over some excellent keyboard motifs which propel the track along. There are hints at times of the early jazz rock sound of Chicago (when they were still known as Chicago Transit Authority) floating in and out of the track. The over-riding memory of this track is the stunning contribution of the keyboards.

Track 3, “Monkey Signature” (8:56) leads with a blast from the band and into a keyboard motif, swirling synths and then layered keyboards. Just around 1 minute, the guitar enters and the song just takes off from that point. There is some excellent interplay between the guitar and keyboards, and again the song is littered with those little hooks and catchy riffs. Just prior to the 4 minute mark, there is a stunning sequence with a “flute” and guitar before the electric guitar and keyboards take over the reins of the musical journey. The constant shifting of emphasis between keyboards and guitar together with the subtle and not so subtle, time changes keep the listeners’ ears firmly at attention. There are more of the “trumpet/saxophone” keyboards as the track makes its way out. This is a stunning track on an album that has up to this point, set the bar very high.

“Still-Life” (6:20) is the only track that contains a “proper” vocal and it is provided by John Mabry. Starting with a flurry, the track quickly settles down to an acoustic strum with a burbling synth in the background. The crystal clear vocals by John simply glide over the sparse background. This is a generally slower tempo track than previously shown over the tracks. Around 4 minutes there is a burst of acoustic guitar before a brief keyboard passage, but I feel that this track is all about the vocals. The keyboards do take over around the 5:30 minute point, but that is simply to escort the track out.

The long track, “Sykiatry” (13:40) is built up of nine interconnecting parts. This track has an almost carnival style start with multiple keyboards setting out the themes and at times sounding amazingly like a vibraphone. Some vocalizations appear before the time signature changes and the keyboards are off and running. More of the characteristic keyboards and guitar interplay sweeps through the track and the “flute” returns. The main parts merge together very well and the skill of the musicians is a joy to hear. This is yet another track which just “hits the spot.”

The final track, “Les Canards du Guerre” (6:25) has a very jazzy vibraphone intro with excellent drumming heralding the entry of the keyboards and guitar, although the keyboards again add layer after layer to the sound. I did say that “Still-Life” was the only non-instrumental track, but there is a chunk of spoken word in this track. The track segues into a gentle undulating acoustic guitar and keyboards passage then the electric guitar appears over the top and a time change in the track moves it towards its finale. The final sound that is heard as this track fades is the sound of ducks.

This is simply a stunning album which deserves to be given many accolades, but in reality may not, as it may simply get passed by. I had not been aware of Malcolm Smith, nor his band, Metaphor, and this is an oversight that must be righted. My advice for the album, We Were Here, is very simple, and that is, go out and buy it, at once! Listen to the album many times and appreciate what a tremendous example of progressive rock it is.