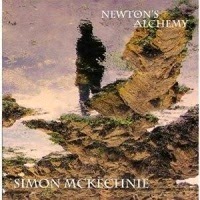 Simon McKechnie is a composer, arranger and musician based in London, and again is a new name to this reviewer. Simon has been active since around the start of the millennium and has composed music for the BBC, founded the fusion band, Azul, has been the guitarist in the backing band for the Portugese artist, Nuno Silva and also debuted as a solo artist in 2011. His debut release was London Reborn, which was his “take” on old London folk songs and the follow-up release was Clocks and Dark Clouds in 2013. This 2013 release eased him towards the more progressive side of music and his new album, Newton’s Alchemy, is a prog rock album based around Isaac Newton’s quest to “uncover the deepest mysteries of existence.”

Newton’s Alchemy features Simon (vocals, guitar, bass, keyboards, dulcimer, psaltery and percussion), Adam Riley (drums), Clare Salaman (nyckelharpa) and Jan Hendrickse (bass flute). To help out with a couple of the instruments, the psaltery is a stringed instrument of the zither family and the nyckelharpa, is a traditional keyed harp.

The album, Newton’s Alchemy, contains 9 tracks with a combined playing time of around 55 minutes. The shortest track included is the penultimate track, “A Great Secret” at 3:14 minutes and “Animated Mercury” is the longest track on offer at 9:11 minutes. An interesting fact about the lyrics on the album is that they are a mixture of quotes from Isaac Newton and original material from Simon. I’m not sure that attempting to fuse these two sources works perfectly and at times feel the lyrics seem “clumsy” and don’t gel particularly with the music.

“The First Matter” (7:51), the album opener starts with some gentle sounds merging into some wonderful electric and acoustic guitar parts before Simon’s voice puts in an appearance. The fusion of the music and the lyrics I find at times strangely distracting, despite listening to the album many times. The music is original and switches tempo suddenly, maintaining interest and at times, the vocals seem to work very well, but appear “at odds” with the music at other times. Some of the vocal styling brings to mind that of Freddie Mercury, but there are swathes of spoken/chanted sections throughout the album.

There are 3 tracks that seem to be linked, through the Emerald Tablet, an “enigmatic document believed by alchemists to have ancient origins and hold the key to understand first matter and transmutation.” “Miracles Of Only One Thing” (3:48), “The Father Of All Perception” (3:24) and “Force Above All Other Force” (3:25) all carry the sub-titles “Emerald Tablet Parts 1, 2 and 3.” The lyrics of this trilogy are the translations of the Tablet by Isaac Newton. The music on these three tracks is very atmospheric, with some themes being linked and the skill of the musicians involved shines through. The violin, acoustic guitar and flute all provide superb passages within the tracks.

“The Work Begins” (8:51), “Star Regulus” (7:23), “Animated Mercury” (9:11) and “Turning Of The Wheel” (8:24) have a continuation of the stunning musicianship that is so prevalent throughout this album, but I will readily admit that I am still unsure as to whether I like the album or not. At times I get immersed in the soundscapes that are being woven and yet at other points this just does not happen.

At the moment of writing this review I am really enjoying he final track, “Turning Of The Wheel”, which I had failed to “get into” previously, such are the underlying complexities presented by this album.

Newton’s Alchemy is definitely an album that you require to hear several times and then you may be able to decide whether you fall on one side of the fence of the other.

While I have been excited by some of the new music I have come across in the last year or so, there have been some examples that have underwhelmed me and my grading has indicated this. Newton’s Alchemy has presented me with the biggest problem to date as I am not sure if it is a tremendous album or not and has made the grading a complex task.