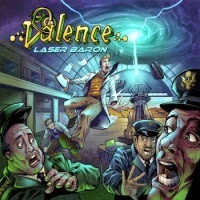 Laser Baron is the second release from the band Valence, following on from the debut release, Sleepwalker in 2012. The name I saw at one point was likened to “valence” in chemistry which has to do with the bonding power of an atom ( all over my head as in a previous life I was a Plant Physiologist) and the band “fuses or bonds” together metal, jam, classical and jazz to form a unique sophisticated progressive style. A terrific claim to make, so does the music available on Laser Baron substantiate this claim?

Valence came together in 2010, the debut release was two years later and now another EP puts in an appearance. The band is a 4 piece outfit comprising Michael Buonanno (guitar), Geoffrey Schaefer (guitar), Ian Morris (bass) and Chris Romano (drums). There is an interesting storyline to Laser Baron, in that it is based around a fictional scientist, Dr Mervin Taylor. The music will bring out the struggle between good and evil and transportation into an oppressed parallel universe, which is a lot to squeeze into 3 tracks. To parallel the music, the band is releasing a series of short stories, written by band member Geoffrey Schaefer, to further explain the full story of Laser Baron.

Laser Baron is a 3 track release with a total playing time of 17:14 minutes. The shortest track on offer is “Wormhole” lasting for 4:31 minutes and the longest track on the EP is the final track, “The Reasoning” nudging just over the 6 minute mark. (6:24)

The opening, title track, “Laser Baron” (5:19) is a full blooded assault on the ears with the twin guitars of Michael Buonnano and Geoffrey Schaefer doing what they obviously do well, powerfully backed up by Ian Morris (bass) and Chris Romano (drums). Some tasty little guitar riffs being thrown out here and there, but sometimes just about breaking the speed limit. At around 4:30 minutes there is a distinct change into a much more jazzy area, but with little time to evolve before the track has gone.

“Wormhole” (4:31) is an almost laid back spacey piece of music with some truly wonderful  guitar playing which, I will admit, was unexpected after the opening “Laser Baron.” As it progresses past the 3:30 minute mark, the urgency and the tempo certainly pick up and we are back into metal areas which escort the track out and into “The Reckoning.”

The final track, “The Reckoning” (6:24) returns us to the thunderous version of Valence so prevalent on the opening track. The difference this time round is that there are touches of the melodic themes from track 2 and the furious shredding style seems to have been curtailed. There then follows some excellent guitar passages, but the heavy metal thundering is almost palpable just below the surface.

Laser Baron, I will admit, highlights a style of progressive music which I would not class as my favorite. I find that guitarists who seem to like being speed merchants are notoriously difficult to tell apart, and thereby hangs the problem I found with Valence. I found parts of the songs excellent, and the musicians are obviously skilled, committed craftsmen, but unfortunately, I thought that much of what I was hearing was very generic in style and lacked the very factor they were aiming at, uniqueness.

Give Laser Barona few listens and make up your mind whether you want to create a space on your CD shelf, but on this occasion, I think I will pass.  An evolution from the debut release, but I still feel there is a way to go to get to where they want to be.