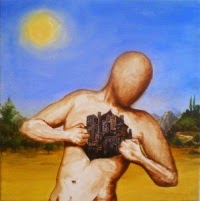 As I have often commented upon previously, being a reviewer has allowed me to come into contact with artists that I may otherwise have overlooked. One such artist is The Gabriel Construct and the debut release, Interior City. The Gabriel Construct is the name given to the solo project of Gabriel Lucas Riccio, who hails from Salisbury Maryland. Newly graduated in music in 2011, this multi-instrumentalist has released what is best described as a “dark and atmospheric” album, which Gabriel has said is a “concept concerned with overcoming the mental programming which holds each of us back.”  This is a very powerful statement indeed, and the question that this reviewer will attempt to answer is, whether this release is indeed achieving these goals.

Interior Cityis a 10 track album with a running time of around 72 minutes. The shortest track on Interior City is track 5, “Retreat Underground” at 2:38 minutes and “Languishing in Lower Chakras,” the penultimate, and longest track, runs on for just over 11 minutes (11:09).

The opening track toInterior City, “Arrival In A Distant Land” (6:51) opens with a sound which seems familiar but, in effect, turns out to be the “strings” inside the piano being strummed, before there appears an audible bass sound and then some of the higher registers. Certainly, the start creates an interesting aural soundscape, but seemingly without any direction until a vocal appears around the 3:15 minute point. An almost spoken style of vocal carries the track along until a gentle piano motif appears briefly before the voice returns with increasing venom, which moved the track very close to discordant, with the repeated statement “I can’t get out.” Just as quickly as it built up, the track drops back into simple piano but retains that air of discordancy. As a constant advocate of the importance of opening tracks to the way a listener “hears” the rest of the album, the best description of “Arrival in a Distant Land” is uncomfortable, moving the listener out of their comfort zone. Such a feeling may, or may not, be a good thing within the context of the concept being laid out, moving on through the album will tell.

“Ranting Prophet” (4:50) has Gabriel’s voice appearing in a gentle piano based introduction, but within 50 seconds has rocketed into a full blooded band sound which seems designed to continue the feeling of unease generated by the opening track. The almost manic tone the voice reaches and the similar sounding violin which cuts across the track add to this feeling. To add to this reviewer’s feeling of discomfort, there is a little burst of the metronomic drumming that prevails in a large number of progressive metal outings. The feeling of bleakness within the concept is certainly to the fore on the two opening tracks.

The shortest track, “Retreat Underground” (2:38), hits the ground running, with a mass of drums, piano and bass played at speeds thus far not achieved, together with harmonized multi-layered vocals (although sometimes a solo voice is heard), which is very impressive and segues into “Subway Dwellers” (5:32) which tones the speed back a little bit whilst maintaining the vocal style. At times the music and the vocals seem to be “slugging it out” to see who comes out ahead and this tends to distract from the initial appeal of the track.

“Languishing in Lower Chakras” (11:09), the longest track on Interior City is certainly sparse in its introduction, with some piano flitting in and out before a plethora of random sounds filters into the proceedings, including various voices, humming and clapping. This is certainly an atmospheric piece with the sounds slowly building and the piano continuing to underpin what is going on. The sound changes around the 7 minute point to a more energetic humming which supersedes the other sounds. The gentle undulations of the various sounds continue and the fadeout of the track sees a repeated “Get me out of here.” This track is an interesting soundscape making the track almost like an oasis of calm within a desert of discordancy.

At the outset, I described Interior City as dark and atmospheric, and I would still use those terms but can add some more details to the description. Gabriel Lucas Riccio is without doubt an amazing musician in that this album is a showcase for some amazing music, but I did find that while many albums produce a balance between the light and dark scenarios within the music, Gabriel shows an either/or approach. The music is either light, and tends towards the softer, piano based, single voiced sections, or it is dark, and becomes heavier, faster with multi tracked voices, “speed metal double bass drums” and quickly enters the world of the discordant. There is no graduation from one extreme to the other; the change is immediate, almost like flicking a switch.

Interior CityI found a difficult, and at times, uncomfortable listen, but persevered in the hope of understanding what it was all about. In effect, it reminded me of my son, many years ago, listening to a particular track (Aumgn) from the Tago Mago album by the German band, Can. He commented that he disliked the particular track intensely, but when I suggested he just switch it off, he said that he couldn’t, because although it made him feel uncomfortable, he felt he had to keep listening.

Give Interior Citya good few listens and make up your own mind about the album, but I feel that it is an album that I will be unlikely to revisit.