Metal Warriors THOR Return To Hollywood For An Exclusive Show, Celebrate The Deluxe Re-Issue Of ONLY THE STRONG! 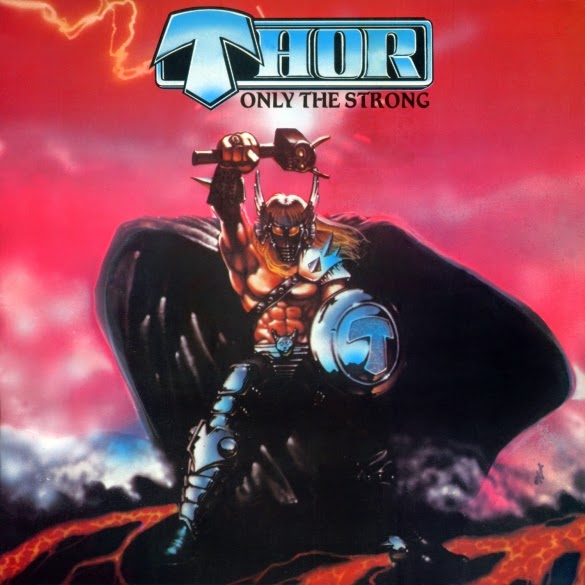 Los Angeles, CA - Muscle-bound superheroes THOR are set to fly to heavy metal’s very own Valhalla, Hollywood CA, on Saturday, May 24th, for an explosive performance at the Loaded club on Hollywood Blvd. This Vancouver outfit originated in the early ‘70s with body building champion and former Mr. USA Jon Mikl Thor, and quickly gained a devout following thanks in part to the band’s elaborate and supremely entertaining live shows, which frequently featured Jon performing not just outstanding anthems of metal but also astounding feats of strength - bending steel bars with his teeth and exploding water bottles with his lungs!Jon would go on to appear on the Merv Griffin Show in 1976, which led to a licensing deal with RCA and the release of THOR's debut album Keep The Dogs Away the following year.

But it wasn’t until the group’s 1985 album, Only The Strong, that Jon Mikl & Co. really began to flex their muscles. Recorded in the UK, the album produced two British chart-topping classics, “Let The Blood Run Red” and “Thunder On The Tundra,” and earned the band a truly international following. Now, on the eve of the 30th anniversary of its release, Deadline Music will offer a special deluxe CD/DVD edition of this metal masterpiece! Billed as the COMPLETE THOR experience, this set includes the entire Only The Strong album along with several rare and unreleased bonus tracks PLUS an incredible 60 minute concert DVD capturing the band in live performances during their early ‘80s heyday, performing stunts and ripping through their best songs - all packaged in a gorgeous 8 panel digipak with a full color 16-page booklet!

Jon Mikl Thor enthuses, “I am ready to take the THOR visual and sound experience to the entertainment capital of the world! What better place to launch the Only The Strong CD/DVD deluxe edition! As the Superhero Thundergod of Rock N’ Roll, I promise a night of startling metal and entertainment for all!”

To pre-order the CD or vinyl on Amazon: http://georiot.co/lzs

To pre-order the digital album on iTunes: http://georiot.co/38MC

For the latest information on Thor, visit: http://www.thorcentral.com/