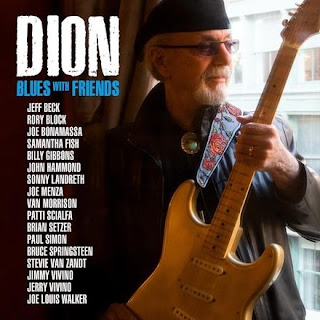 Dion was born, Dion Francis DiMucci in Bronx, New York. Throughout his career, he has seemingly done it all. Although at 80 years old (almost 81), you could expect that. While his musical beginnings link back to 1957, it was not until 1960 that Dion went solo and started to experience some true momentum in his music. Having gone through several different phases in his career, he has fiddled with so many different genres from rock to Christian, and R&B. I mean who else can form several different bands, break out into a solo career, and genre hop so effortlessly to arrive at 80 with such a short album discography? That has been revealed through Dion’s ventures with the Belmonts, himself, and revolving from Christian back to secular music. Recently he released Blues With Friends.

When “Blues Comin’ On” starts up, you immediately understand why the “blues” could be both uplifting and also get you right in the gut. It starts the album off with a very positive chord and tone, while the lyrics are reflective and not exactly light and positive. “Kickin’ Child” is a cruiser of a tune. With the top-down and the wind blowing through your hair, it offers a continuation of a feel-good spirit. Then you get the jazzy-influenced “Uptown Number 7” to conclude the trio of overall positivity.

“Can’t Start Over Again” at first, sounds like a country song. It’s like the singer is a rolling stone trying to find his way. But, when you listen more closely, it’s more of a heartbreak that acts as a roadblock in his life because the point of a do-over is so tough to comprehend. “My Baby Loves to Boogie” bounces right back to a funk beat. The song is a great way to step onto the dancefloor and…boogie. I’m reminded of the Blues Brothers here. “I Got Nothin’” is a cool message of letting a partner know that one might not have a lot of material goods or a lavish lifestyle, but in the end, they do have the capability to still make one another happy. “Stumbling Blues” is a great play-on song lyrically of the way we often feel when we first become infatuated with a new love interest.

Moving forward, “Bam Bang Boom” is a happy ode to a woman who gave new meaning to the singer’s life and he seemed he couldn’t be more thrilled because of it, just like that. “I Got the Cure” lays out the singer’s confidence in himself as well as for the perfect remedy of a bad day or mood. The album then switches up to “Song For Same Cooke (Here In America)” which is a wonderful reflection on the famed singer, Sam Cooke. It spoke of a bond between the two artists that went deeper than just music.

“What If I Told You” is a twist on the typical cheating or wronged love song. The song tells of how the singer is on to his lover’s actions and feelings (or non-existent feelings) towards him and toward someone else. Knowing he is above the tomfoolery of the back-and-forth of a breakup or fight, he just gives off premonitions of how aware he is of her actions.”Told You Once In August” pairs well with the prior song. Another cheating song told in a different form, holds more of a western vibe to it this time around.

Rounding out the final tracks, “Way Down (I Won’t Cry No More)” sings of hurt and pain from love but, speaks more to the redemption of the singer’s attitude. He will in-fact, rise above this temporary pain of betrayal and be better for experiencing it. This leads us to the finale. Although sounding initially like a somber tune, a very positive, reflective message shines through.

Speaking of the Lord, Dion directs the listener to always look towards God to overcome the greatest adversity. This last track is an opposite mirror effect of his first track “Blues Comin’ On” where the lyrics are gloomy, but the tone and sound are both happy; whereas “Hymn to Him” is sounding more slow and dark but, a very powerful message prevails.

Key tracks include: “Hymn to Him,” “Kickin’ Child,” “Stumbling Blues.”