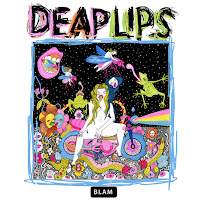 In their latest attempt to throw their arms around the world, The Flaming Lips have teamed up with the bluesy LA duo, Deap Valley, to create a curiously satisfying collaboration. Flaming Lips vocalist Wayne Coyne and multi-instrumentalist Stephen Drozd join Deap Vally guitar/vocalist Lindsey Troy and drummer/vocalist Julie Edwards in this psycho-blues-robot-alien-pop rock experiment.

Since their triad of masterworks at the turn of the century, The Soft Bulletin, Yoshimi Battles the Pink Robots & At War with the Mystics, The Flaming Lips' trajectory has been crooked and confounding at best. While 2009's Embryonic gave fans hope for the band's evolution into an impassioned psycho-prog sound, 2013's The Terror steered their fans into another confounding direction. 2017's Oczy Mlody and 2019's King's Mouth attempted to blend elements of this newfound psycho-terror with the aforementioned triad of masterworks, striking chords in spots, yet missing the beat as a whole.
What has truly kept The Flaming Lips compelling and viable over the past 15 years has been their work with other bands and artists. Arguably, their best album over this period has been 2012's The Flaming Lips and Heady Fwiends.  Ambitious cover albums of Sgt. Pepper and Dark Side of the Moon assembled even more "fwiends." This current collaboration with Deap Vally follows suit by layering soulful vocals over more complex, yet lighter tracks.  "Home Thru Hell" is a standout that exemplifies this strange fusion, even adding some playful pokes. "taking all my wisdom from the Flaming Lips of youth."
More intriguing elements of the Flaming Lips such as robotic blurps, churchbells, and descension into divine, jangling netherworlds are peppered throughout the collection. "Hope Held High" and "Love is Mind Control" are superb tracks reminiscent of some of the Flaming Lips' best psycho-pop-acoustic work. Lindsey Troy's vocals on these and other songs add an Amy Winehouse-style nofucksgiven nihilist bent to the atmosphere.
Most satisfying is hearing Deap Vally's aggressive garage sound soften amidst The Flaming Lips psycho-prog vibe. Alternately, The Flaming Lips become sharp and soulful within Deap Vally's electrified boundaries.
All in all, The Flaming Lips skillfully harnessing Deap Vally's raw strength makes for one of the most pleasant surprises of 2020. There's enough here to please fans of both bands and then some.
- Tom Endyke | Guitar & Pen