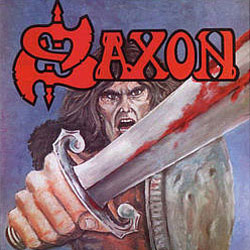 I thought it fitting to show the cover of the first Saxon album since I am starting at the beginning with these remasters. I have been listening and getting to know the band much better.

Each disc comes in a hardbound book style case with pictures and lyrics. Each one is a collector's piece in its own right. Keep in mind these are the “Deluxe” reissues, not the set that came out in 2012, there is a difference.
I never got into Saxon as much as bands like Judas Priest but thanks to these great remasters my thoughts and listening habits have changed. I do have to say that I still feel Sacrifice is their best album. It’s a personal favorite and I actually got the vinyl picture disc for that release.

I read a review recently that said Saxon has been carrying the torch for New Wave Of British Heavy Metal much stronger than Judas Priest. That is a view I do not share wholeheartedly but I will say they are both still very strong bands and each has their own stamp on the genre. Saxon is not as heavy as JP although I heard a steady progression of their music from their first self-titled release to the Power & The Glory. That is what can make a listener so much more appreciative of a band’s legacy than before. If you start right at the beginning and listen to how a band matures with each album it does make a difference on your opinion going forward listening to the band. Also, the formative process you can hear through alternate versions of a track or a demo. This really lets you dig in and understand a cradle to grave if you will process before we as listeners have the chance to hear it. This is an opportunity that opens a door a listener can open more often with remastered sets, which have become more commonplace than ever.

The hardcover booklets, pictures, and information provided make it all a real history lesson in metal music and how Saxon was a major influence on the development of the genre. These are all high-quality remastered releases that the long-time fan will appreciate, and those that want to explore one of the progenitors of NWOBHM. I must say I will feel incomplete if I do not hear the next batch the comes out. All of the albums are out on limited edition swirl colored vinyl now as well. I would also recommend the four-album set on vinyl The Decade of the Eagle (1979-1989) which is excellent.

So, it certainly seems there is still a good market for a band that kicked things off in 1977. This is further proof of the Saxon imprint on heavy metal. They are still going strong and touring so make sure you check these special releases out if you are a fan. I am sure they will be found in many collector’s vaults soon enough and I would expect their value to rise with the passing of time. I know one thing, after making my way through all six releases I certainly see why they are so popular, they are now more popular in my listening rotation!